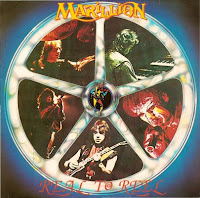 I hadn't planned on doing three in a row from 1984, and to be honest, I didn't buy this one as a new release because it just wasn't available around here when it first came out.

This was one of several Marillion albums to show up in local record stores in the wake of the relatively well-met Misplaced Childhood album of 1985. It's a live album, but different from most live albums in that it's a single record--just about every other live album I've seen is a double. I'm not usually one to buy a live album because I'm not usually interested in a live rehashing of something I already have the studio version of, but after all, this was Marillion, so it's different. Also this album has two songs, "Market Square Heroes" and "Cinderella Search," which I did not have the studio versions of at the time and that was even more reason to buy it. "Market Square Heroes" was their first single release but not part of an album. "Cinderella Search" was the B-side of their single "Assassing" which was from their second album Fugazi, but it was also not on that album.

Fish-era Marillion are still one of my most favorite bands and I have never tired of listening to the albums repeatedly. This album has some fantastic live keyboard work by Mark Kelly which just boggles my mind.

I had some trouble with this one, which was all the more frustrating because it's one of those records that I played only once in order to tape it. A second cleaning took care of all but very minor pops which I edited out easily, so I ended up with a perfect rip.