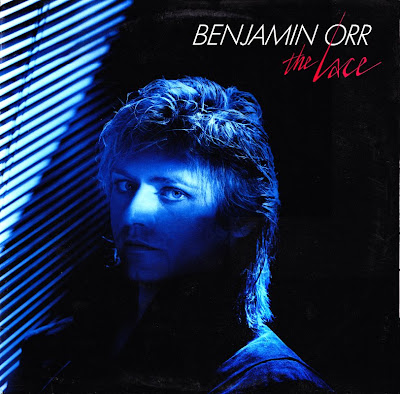 I liked The Cars, but not enough to go out and buy any of their albums. Although, these days I think I would like to have some sort of greatest hits compilation. So...I'm not sure why I bought this album, but I bought it in 1986 as a new release.

Ben Orr (born Orzechowski) was the bassist and one of the vocalists for The Cars, performing lead vocals on some of their big hits such as "Drive," "Bye Bye Love" and "Just What I Needed."

The Lace was his only solo album, and it generated one hit, "Stay the Night." This is quintessential 80s pop. If you came of age in that decade, a few seconds of this record might give you flashbacks. I don't remember being terrifically impressed by it back then, and I don't think I ever committed it to cassette for repeated listening, but it seems somehow enhanced now by nostalgia. This is an album that, to me, can be listened to only at night. It doesn't make sense in the daytime.

No pops on this album, but there were a few faint, dull thumps that must be from vinyl defects. Not noticeable under normal conditions. Songs for the general favorites playlist: Stay the Night, Skyline, When You're Gone, This Time Around.

Benjamin Orr died at the young age of 53 on October 3, 2000 of pancreatic cancer.