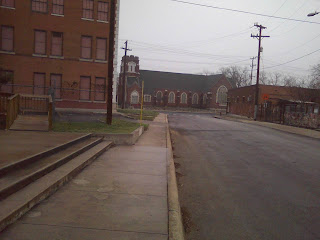 The video clip in the previous post was another from my phone, of course, taken last week at Sunset Station.  I tried to edit it with some humorous credits but for some reason Windows Movie Maker wouldn't save it.

So anyway here's an old church in the far background that I liked the looks of.  I mostly took the picture to remind myself because I thought I might put it in a story.  This was on the near southside, but I don't remember the street.

I have a few other work pix that I'll post soon, but I thought I'd spread them out into separate posts just to have something to do.
Posted by AlanDP at 8:11 PM