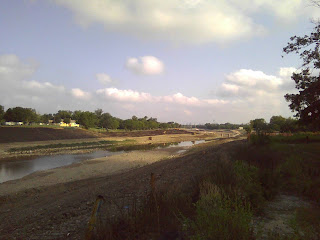 I took this with my phone today.  This is a shot of some of the Riverwalk expansion construction from a spot that most people will never go--and really have no reason to go there--unless you live there or are reading the water meter.  The location is about right here.  For a long time this meter never got used, until the construction began and then the meter was replaced with a new one and now it gets used all the time.  I think it was originally for irrigation of the riverbank area but I'm not completely sure.*  It's most likely now being used for the construction work, because all of the new Riverwalk irrigation is going to be with recycled water.  If you ever go by some place where they're doing construction and you see a network of purple pipes all over the place, that's the future irrigation system.  All irrigation pipes, meters, etc., are that color of purple.  If you click to enlarge and look closely just to the right of center, you can see the Tower of the Americas peeking over the treeline.

By the way, all of the S.A. golf courses used recycled water for irrigation, too.  The Toyota plant and some of the other businesses that cover a lot of area also use recycled irrigation water--for example that big bakery out on highway 87 east.


*There are a lot of old irrigation meters scattered around that were put there long ago, before the recycling project began, and are now just sitting there, unused for years--even decades.  Many of the islands in the downtown area were originally equipped with irrigation, but then later they were bricked or paved over to reduce water usage, and the old meters are still there, doing nothing.
Posted by AlanDP at 3:02 PM