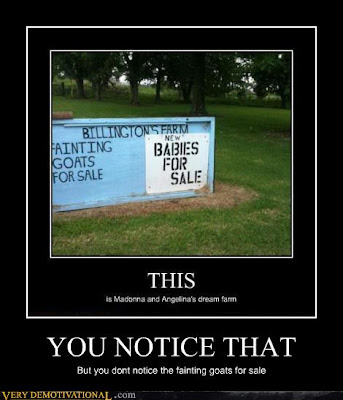 Fainting goats.  Heh.  When I was a kid, a guy who was in the Air Force and stationed at Randolph, and who lived in Universal City bought the 50 acres behind my dad to use as a sort of "weekend getaway" place in the country.  He never built a house there, but he did build his own gun range, with benches at 25 feet (for pistol shooting), and at 50, 100 and 200 yards.  He gave us permission to use the place--we occasionally ran some of our cattle on it, and to hunt there if we wanted or to use the gun range.  So I grew up with this home-made gun range just a couple hundred yards from my house.  Man, I miss that.

Anyway, he also put some goats on it, partly to help clear out the underbrush--which goats are exceptionally good at--and partly to get an agricultural exemption on his property tax. He had told us they were "fainting" goats, which I had never heard of before.  So I knew about the goats, but never really thought about it much.

One day I was over there, probably walking to the gun range, and his dozen-or-so goats were following me, probably because they expected me to throw out some pellets or range cubes for them.  Being a somewhat mischievous teenager at the time, I suddenly spun around and shouted "BOO!" or something like that at them.  Goats suddenly toppled around me like they had all just been struck dead by the hand of a vengeful, goat-hating god.

For about two seconds my mind was completely blank.  Well, maybe not completely blank, but certainly there was nothing in my thoughts except a whole bunch of exclamation marks and a few question marks.

There's a certain breed of goats that have an inherited genetic disorder that doesn't actually cause them to "faint," that is, they don't lose consciousness, but they do become paralyzed when frightened or stressed.  That Wikipedia article says "Older goats learn to spread their legs or lean against something when startled, and often they continue to run about in an awkward, stiff-legged shuffle."  Well, these were all fully adult goats and they hadn't ever learned anything.  They just collapsed.

After a few seconds I remembered what he had told us about the "fainting" part, and within 10 or 20 seconds they were all up and staggering around, and a minute or so later they were all back to normal.

So then it became funny, and I still laugh about it sometimes when something like this picture reminds me of it.
Posted by AlanDP at 9:38 PM