Just thought I'd take a moment to recommend this show.  It's on the Disney channel, which would usually mean it's full of stupid, but... 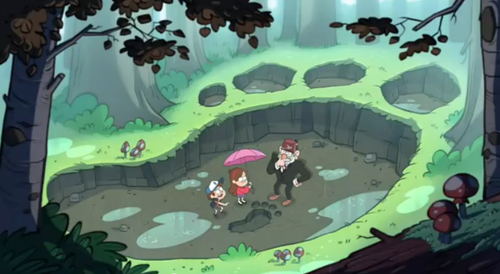 I don't how it happened, but this is a great show.  It's full of in-jokes for people who are fans of strange phenomena, and more in-jokes for adults who remember things from 30 years ago or so.  I don't know how a show like this ever ended up being aired on Disney, but man it's good.  I just love it.

It's about twins brother and sister named Dipper and Mabel who are spending time with their great uncle Stan, who they call Gruncle Stan.  Stan is a scheming, avaricious man who runs a tourist trap in a weird little forest town named Gravity Falls, nearby where lives Bigfoot, the lake has a lake monster, and every other weird thing you've ever heard of happens at one time or another, plus a few things you haven't heard of yet.  And the twins' arch-enemy is another kid who is a faith healer.     There's even a tome of hidden knowledge that plays a big part in the show.  Give it a watch sometime if you have a basic cable package.