Today I had a route that I do occasionally, and which I really hate because it's so hard, in the area of Hot Wells Blvd. and S. Presa.  At one point I came out on S. Presa and walked up the east side of the street, from which I could view the old Hot Wells Resort.  Here's a postcard of the resort in its heyday.  It's undated, but I think we can safely assume early 1900s. 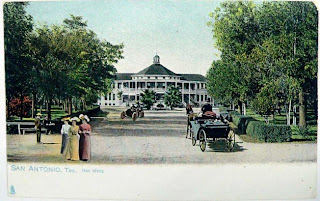 My great-aunt (one of my grandmother's sisters) was still working as a caretaker at this place when I was a little kid, and I went there with my mother to visit her a couple of times before she passed away when I was 5 or 6 years old.

This photo was taken in 2000, and it's still accurate except for the people who now live there in a large Airstream camper which is parked off to the right.  When I was a kid and my aunt worked there, one of those wings had already been closed down--I don't know which one, except that it was also the one that was allegedly haunted, but as you can see, since that time in the late 60s there is no part of it that is now habitable.

I don't really have a point to make, just relaying some brief personal family history.  I will say that I wish I could get a close-up look at the ruins and take some photos.
Posted by AlanDP at 7:18 PM