One of my favorite blogs, one which I've been "reading" pretty much as long as I've been reading blogs, is called If Charlie Parker Was a Gunslinger, There'd Be a Whole Lot of Dead Copycats.  I used "reading" in quotes because it's an image blog.  I don't think "photo blog" would be quite accurate because that suggests someone who posts photos they take themselves.  This is an image blog, primarily of photos but sometimes of other things like movie posters or old ads.  The posts don't use any categories; this could be because back when it began, Blogger didn't have a category function.  However, the title of the posts themselves describe the category, followed by a sequence number for that topic, for example "Twilight of the Dreamboats #23" and so forth.  By the way, that particular series is of vintage cars that have been wrecked.

Another series is "Before and After."  Here's a recent photo of the "before" from this series: 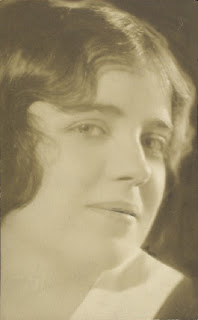 That's Frances Bavier, a.k.a. Aunt Bea.  I guess you could say this blog tells the story of 20th century pop culture, except that it isn't just pop culture, it often veers off into "legitimate" history and culture as well.

A few months ago they began something new:  a sort of podcast called Radio Free Gunslinger.  Each "episode" consists of four or five sets of five songs each, interspersed with commentary from someone from history.  The commentary is taken from interviews or recorded lectures, and in at least one case, vintage radio ads.

I didn't began listening to this at first, for some reason.  I don't know why.  But I've been catching up recently and they are very interesting as well as enjoyable.  I've been learning about people who I'd only vaguely heard of--or even never heard of--so I've had to look them up and read about them.  I've also heard lots of music that I really liked.  Fortunately, the podcasts are encoded at 160 kbps, so it's easy to crop out songs that I want to keep for repeated listening and still have them at a decent quality.

Unlike mosts podcasts, this is not one that you can subscribe to via iTunes or some other audio service like that.  You just have to download them and play them.  I have been listening to these only at home, because I like to keep the information about each show open so I can keep referring to it and see the musicians and song titles that I'm listening to.

The shows are stored at archive.org, so you can go there and look up "Radio Free Gunslinger" for ease of mass downloading, if you want.  You'll have to go to the Gunslinger site itself to get the program information.

I think the most interesting one, as far as the interview clips go, was the one with Lee Harvey Oswald.  It was apparently taken from a radio interview after he had returned from his stint in the Soviet Union.

Every now and then, there's a set of old-time country gospel music, which as you probably already know, is something I really like.  There's already at least one that I started practicing on my ukulele.

Some of the other hosts, for example, are Alice B. Toklas, Bing Crosby, Vincent Price, Syd Barrett, and Howard Cosell.  That Cosell show was another really interesting one, and had lots of great music.

I recommend it.  Check it out.

P.S.  If any of the Gunslingers happen to read this post, I hope my comments did your show justice.
Posted by AlanDP at 7:48 PM