Big news, which you already know if you're one of my FB "friends": I got a smart phone. It is a refurbished model, which means it's already obsolete by tech junkie standards, but as someone who has always explored the cutting edge with older equipment, I am having lots of fun with it.

I've been exploring lots of apps to see what I can find useful or just plain fun. I just recently discovered Google Sky Maps and almost thought it was technology sufficiently advanced as to be indistinguishable from magic.

But many of the apps that I am keeping on the phone are quite simple but, to me, brilliant.  One is a pitch pipe app.  It just shows you a picture of a standard C to C pitch pipe and you touch the note you want to hear.  I've already used it for a chorus practice at our church when I had forgotten my real pitch pipe.  Another music-related app is a digital tuner that shows you the note being played/sung as well as the frequencly in Hertz with a small bar graph at the bottom to give you a better visual image of how far sharp or flat the note is.  I've used it to tune my daughter's guitar and my ukulele, although the uke is pretty good at staying in tune now that the strings are broken in.  It tends to go about 1/4 step flat after a couple of days--equally across all strings, which is pretty weird.  This app is called DaTuner Lite.

Of course it already had a Facebook app as a standard feature.  I also found an RSS reader app called FeedMe which is working pretty well for quick updates.  Just for kicks, I put the Netflix app on it but I haven't really used it yet except to try it out for a minute and make sure it works.

I also put a Bible app on it called MySword for Android.  It's donationware, which means the free version is still pretty cool and is probably all I'll ever want, but for a small donation they'll send you a registration code to unlock all the features, and I think I'm going to do it because it's a great app.

I put the Winamp app on it because it makes it super easy to shoot mp3s into the phone from my computer over WiFi--no more USB cable!  At a friend/co-worker's recommendation I installed an app called RainAlarm OSM that reads your location and then sends you an alert if rain is detected within a certain area (radius selectable in the preferences).  I guess you can understand that, as someone who works outside all the time, rain is something I try to keep track of fairly closely.

Oh yeah, I also thought putting the IMDB.com app on it would be a good idea, because my wife is one of those people who, when she sees someone familiar in a TV show or movie, sits there and agonizes over where she's seen them before, and she won't be quiet about it until she's remembered.  I thought this app would be a good way to keep that kind of stuff to a minimum.

Today, for the first time, I tried out an app called MapMyWalk.  When you finish your walking workout, you can save it and you have the option of sharing it via FB or Twitter.  Since this was the first time, and I wanted to see how it all worked, I didn't send it to FB but only saved it for myself locally.  Unfortunately, once you do that, you can't go back and decide to share it after all, so I couldn't get a good picture of the map (my phone is so old it doesn't have the capability of taking screen shots).  In the future, I think I will send it to FB just so I can get a pretty picture of the map.  But I made a quick & dirty graphic here by taking photos of the screen and stitching them together so you can get an idea of what it looks like. 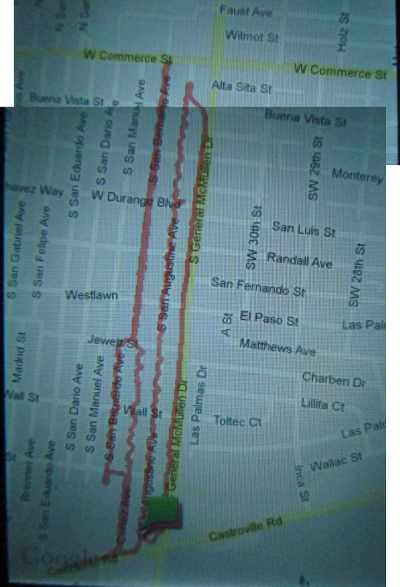 This is how my route today looked.  I had what's called my "birthday route" today, which means they let me pick an nice, easy route and not get assigned an additional 1/4 to 1/2 route extra like we usually do.  So I finished this morning by about 10:00, which was a nice birthday present.  The app said this route was 5.56 miles long.  I like it that the detail is good enough that I can see where I was and was not criss-crossing streets.  It started there at the green square, then it goes straight up the west side of General McMullen.  Then when I started back south you can see that the line gets all squiggly; that's where I began reading both sides of the street, which is what we refer to as criss-crossing.  All the way back to Castroville Road, then up one side of that short stretch of Cortez, then criss-crossing again until I got to Jewett, then "looping" part of S. San Bernardo (that is, up one side and back down the other), then criss-crossing another section of S. San Bernardo with a small loop at the end where it dead ends, then back over to Cortez where I went down the other side of it from where I'd been before.  Then that tail at the bottom is where I have to read several meters along Castroville Road.  Then I walked back to my truck and turned it off about where that red square is, almost exactly where I was when I had first turned it on.

I've done this before with my GPS unit, but unfortunately I can't do anything with it once I'm finished except look at it myself because it doesn't have any kind of networking capability like the phone does, and it doesn't use Google Maps so the map it shows is very, very bare-bones.

It will be interesting to me to map out all my routes like this so I can get a bird's-eye view of them.
Posted by AlanDP at 6:36 PM