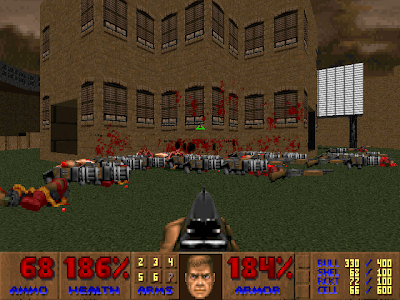 That little green blip is a "cheat" that is part of the ZDoom program.  It's like a sight.  I don't think I would use it much, because most of my combat was so close-range that trying to sight with it would have only slowed me down.

By the way, although I don't really do gun-blogging here anymore, I think I can go ahead and mention last week's range activities.  It had been quite a long time since the last time I went out shooting.  My dad was on vacation so I had to go to his house last Saturday to put out some range cubes for his cattle, and my son and I set up some coke cans around his tank, using the dam as a backstop, and we did some shooting.

He performed quite well with the .22 rifle, fairly well with the Single Six since he hadn't reallly shot a handgun before, and I let him blaze away with several rounds in the .410 just for kicks.  When I was gathering up my ammo for this excursion, I grabbed a box of gun show reloads which had a bunch of ammo loose in the box as well as a plastic bag of cartridges.  I thought that the loose ammo was .38 Special and the bagged ammo was .357.  I was planning on having him shoot the .38 stuff first, and then if he handled it fairly well, go ahead and let him step up to the .357.

Well, I didn't look at the ammo closely enough and it turned out that it was all .357.  But, it was stuff that had been reloaded just for target practice and wasn't particularly powerful for .357 ammo.  However, it was most definitely still at .357 level and far above .38.

So I went over all the stuff about how he should hold it and all that stuff to help him minimize and control the recoil.  The first couple of shots he took a few steps backward because the recoil startled him a little.  So I asked him if he wanted to go back to the .22 and he said, "No!  I want to keep shooting this.  I like the way it kicks."  So I ended up letting him run 4 or 5 cylinders worth through it.  When he finally decided it was making his hand hurt too much, we went back to the .22s and sat on the tank dam shooting turtles for a while.

I have had people tell me that they won't shoot a .357 because it kicks too much.  I have always considered this to be nonsense.  If my skinny 12-year-old can handle one, then I think anyone should be able to unless they have some kind of actual physical disability.

It was all great fun.  Today after I hunted down my cleaning kit, I ran him through cleaning both the handguns.  I decided to leave the long guns for another day.  They'll keep.
Posted by AlanDP at 7:37 PM