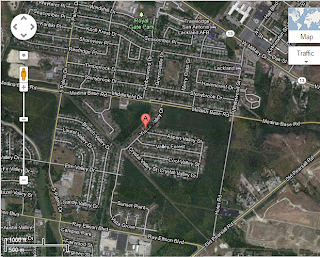 I didn't take the picture below.  This was from a co-worker/friend of mine who is a Field Service Representative, which is a fancy euphemistic way of saying he's one of the guys who turns off people's water when they don't pay their bill, and then turns it back on again when they do.  He was on Yucca Valley just south of Medina Base Road when, down in the brush behind Aspen Valley he saw "a half dozen or so" javelinas.  Here's a still photo he took of one of them with his phone. 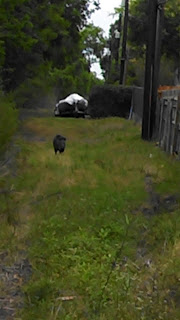 He also took some video but his ISP wouldn't let him email it because it was over 25 MB and when he tried to upload it to his Picasa web album it got stuck in some sort of weird Picasa limbo where he--and only he--can view it but he can't share it or do anything else with it.  So, no video unless he figures something out.

Anyway, I know javelina are very common south of here but this is the first time I've ever heard of any being actually inside San Antonio (inside Loop 410).  So don't be too quick to blame your neighbor's dog or the coyotes on rummaging through your garbage.  It might be javelinas.
Posted by AlanDP at 2:49 PM