I'm on vacation this week.  Well, last Friday the A/C bit the dust.  Someone came out by Saturday afternoon and made enough minor repairs to get it cooling again, so we only went about 24 hours without it, but what a bad 24 hours it was!  It was the hottest day of the year so far, with outside temps hitting somewhere around 110 here.  The digital thermometer in my bedroom got up to 99.7 by the time he got cold air blowing about 3:00 PM.  About 9:00 that night when I was ready to go to bed, the inside temp had dropped to about 86.  Yesterday a couple of other guys came out and made all the more extensive repairs required to keep it running indefinitely.  Fortunately I was able to get it financed so I don't have to pay for it all at once.

My wife is still working this week, but she has an irregular schedule and is off today and tomorrow.  So today we took a trip to the Texas Snake Farm and Exotic Animal Park in New Braunfels.  For those who don't live around here, back when I was a kid this place was just called the Snake Farm--they had mainly snakes plus some other reptiles.  It was recently bought by a new owner and has been expanding, so that they now have quite a lot of other stuff, both various birds and mammals, and the new owner has also bought 30 additional acres behind the current park which he is going to expand into even further, so we'll have to go back again in a few years and see what's been added.

Unfortunately, I found it just about impossible to get any decent photos of the snakes because of the wire frames that kept people away from their cages plus the glass fronts of said cages.  What few good pix I took I'll be adding to my photo blog With Camera Eye later on, but I'll upload some here that didn't make the cut for the photo blog.  Click all images for larger versions. 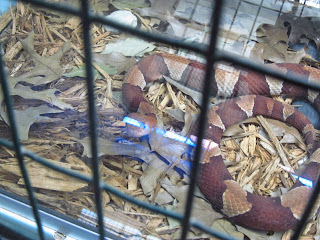 Of all the snakes around here, the copperhead is the one I've seen most often in the wild and is the one I'm most familiar with.  They had this magnificent specimen which is one of the largest I've ever seen.  Of the dozens I've encountered in the wild, I've probably seen only one or two the size of this one.  I'd say it was probably around 30 inches long.  I can say that the longest copperhead I ever actually went to the trouble of measuring after I'd killed it was 28 inches long.  I know they can get much larger than that in other parts of the country, but that's pretty big for around here.  They also had a coachwhip, another snake I'm very familiar with from encounters in the wild, but conversely it was the smallest--even tiniest--coachwhip I'd ever seen.  I couldn't get a good photo of it. 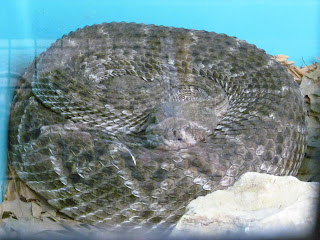 Some kind of rattlesnake. 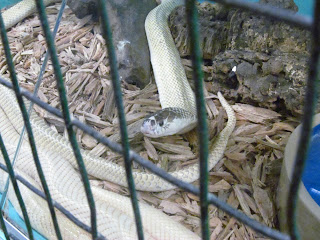 I think this was some kind of cobra.  You can see that he had looped back over himself a few times.  He was quite long. 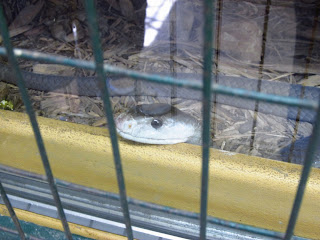 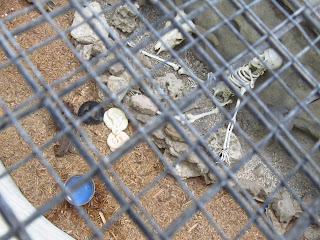 This is "the snake pit."  Those are all rattlesnakes coiled up down there.  Sometimes you can see them get fed, but not today.

By the way, they have three mountain lions but I just couldn't get a decent photo of them because of the fences.  One of the females was in heat, and was getting a lot of unwanted attention from the male.  On the plus side, we all got to hear what a mountain lions sounds like.  Plenty of vocalizations going on with that one female. 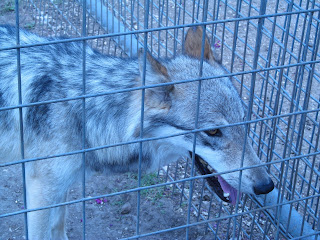 One of their two gray wolves.  This looks blue because I forgot to switch over to outdoor lighting and still had it set on tungsten for the snake shots.  It was the only good, clear shot I got of her face. 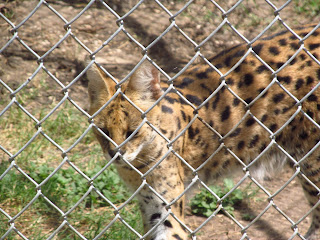 An African serval.  The guy who worked there said it was kind of like the African version of the bobcat. 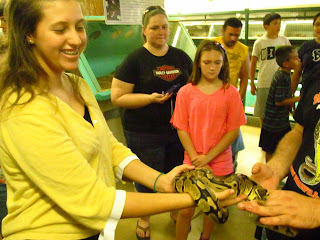 And this is my daughter holding a ball python.  My son couldn't summon up the courage to actually hold it, but he did at least touch it.

After we left there, we went up the highway to San Marcos and went to the Aquarena Center, which used to be a theme park called Aquarena Springs.  Pretty much all the old fun stuff is gone now.  I had been to it twice before when it was still a theme park, once when my wife and I were first married, and once on a school trip when I was in fourth grade.  The biggest thing they have there now is the glass bottom boat ride.  They also have a small aquarium and a floating wetlands boardwalk.  So we weren't there for very long, but the kids thought the boat ride was pretty cool.

Another by-the-way, they also have two hyenas at the Snake Farm.  I got some pretty good video of them being fed, but the file turned out quite large, around 500 MB, so I might try to upload it later on.  It will take me a while to upload even with my fairly-high-speed service.  I also got an excellent shot of a capybara, but I'm saving that one for the photo blog.