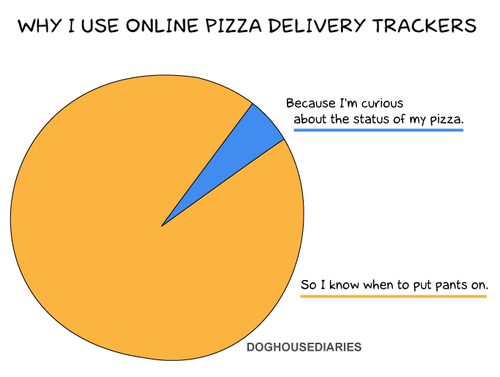 I saw this at Tastefully Offensive.

During my career as a pizza delivery guy, most of the time it was all quite boring and routine.  Every now and then, something weird or funny happened.

There was this one woman--I'm not going to say her name even though I still remember it--who lived on East Weinert St. for a long time.  She was a regular delivery customer and she always ordered a sampler with no jalapeños.  The sampler is what Mr. Gatti's called the pizza with a little bit of everything on it.  I think Pizza Hut calls theirs the supreme.  Anyway, she ordered so much that I got to recognize her voice and had her address memorized.  So usually as soon as I heard her voice on the phone I would start writing everything down even before I started asking her for her info.  However, every now and then, a man would place the order for her address.  It was never the same man.

She was not what I would normally consider especially attractive, or even not especially attractive.  At the time I was in my mid-to-late 20s, and I guess she was about 40 then, although she looked older.  Or, like someone I know sometimes says, like she was "rode hard and put up wet."  Sometimes she would answer her door just barely concealed--or perhaps I should say just barely unconcealed--with a bath robe.  She had a lot of different male "friends."

So one night some guy ordered a large sampler for her address.  I took the phone order, made the pizza, and then delivered it.  I pulled up in front of the house and was about halfway across her front yard when this scraggly-looking dude came charging out of the house, shirtless, and in the act of buttoning up his pants.  "How much?" he hurriedly...er...ejaculated.  I told him it was $15.60.  He started counting out money but after about ten seconds he just thrust a $20 into my hand and said, "Keep the change, man!" and ran back into the house with his pizza.  The woman always tipped, but it was usually only a dollar or so.  This was the best tip I ever got from someone at her address.

Eventually she got respectable, I guess.  She married a widower who had two boys and who lived in a much nicer part of town, and she moved into his house.  After that, she always answered the door well-dressed and seemed almost like a different person.  But she remained a regular customer and regular tipper right up until I quit that job.
Posted by AlanDP at 7:25 PM