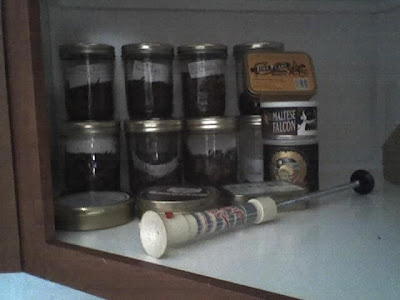 Here's a really lousy camera phone photo of the beginnings of my new tobacco cellar. Eleven jars of various bulk blends and 6 thus far unopened tins. That thing in the foreground is the Pump 'n' Seal.

I have been keeping bulk tobacco preserved by vacuum-sealing for a long time, but I've been using an electric Tilia Food Saver. This is a perfectly fine machine and indispensable for long-term bulk storage, but I wanted a way to keep smaller portions preserved while still having easy access to them. I did some searching around on the internet and finally came across this device called the Pump 'n' Seal.

It can used used with any "canning" jars, like Kerr, Ball or Mason jars. I think that it may even work directly on some tins, but I haven't tried that yet (any lid that has a rubber seal should work). A tool that is basically an all-metal thumb tack is used to puncture a hole in the center of the lid. Then a little yellow piece of rubberized tape called a "Tab-Chek" is placed over the hole. The pump is then placed directly over the hole and you pump the air out. As the air comes out, the vacuum sucks the rubberized tape down, forming a secure vacuum seal. When you want to take something out of the jar, you simply peel the tape up slightly until the air wooshes back in, then unscrew the lid. The tape can be used over and over again, so it isn't necessary to replace the tape every time you open the jar. The whole kit came with enough "tab-cheks" to provide for a very large cellar.

Some other pipe bloggers have mentioned using certain 2-ounce Mason-type jars for this. I couldn't find any locally, so I got these 4-ounce wide-mouth jars. The size of the jar doesn't matter to the Pump 'n' Seal.

The pump comes with a tiny hose that you can use, with a little extra care, to vacuum-seal typical heavy-duty baggies such as Ziplock freezer storage bags. It should be very useful for removing air to prevent freezer burn. I bought this gadget with the sole intention of using it to preserve pipe tobacco, but I'm writing about it here because I'm sure some readers would be interested for other storage purposes. Another important thing about this gadget is for those who wish to survive "off the grid." It doesn't need electricity, just elbow grease. 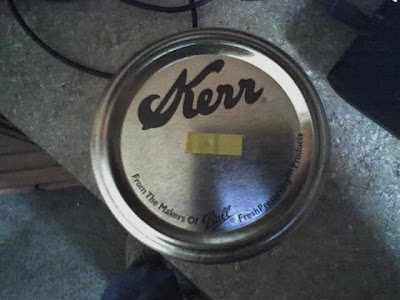 Here's a close-up of a sealed jar. You can see the tiny dimple in the middle where the hole is and the tape has been sucked down. I folded one end of the tape (they're designed like miniature band-aids) over so that it wouldn't adhere to the surface and would give me a little handle to use when peeling up the tape to re-open the jar.

This is going to give me a whole new way to store my pipe tobacco, and will allow me to provide myself with a greater daily variety than previously, when I usually just opened a vacuum bag and smoked it all until it was gone before opening another.

That reminds me. I still have a 4-ounce bag of Bayou Morning around here somewhere that I seem to have misplaced.

The kit which comes with the hose and 100 tab-cheks is about $33 with shipping included, pretty much inexpensive enough for anyone to try out without endangering themselves financially. Extra tab-cheks cost about $10 per 75.

And of course, I am receiving no remuneration for this post. I just think it's a useful device that you might be interested in.
Posted by AlanDP at 2:22 PM