I know how to keep myself between the drops...

I was going to digitize the Grant Hart tape next, but then I saw another tape on the stack that I haven't heard in years and had to rip it. 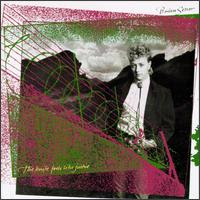 I was never a big Stray Cats fan. But then I didn't dislike them, either. I don't have any of their albums, but every now and then I think I should get them just for kicks.

I think I probably bought this LP in 1986 because it was being played at the record store I was haunting at that time. Either that or I had seen the video on MTV (back when they didn't suck so bad). It's the only Brian Setzer album I have, and once again, I keep thinking I should get some of his "Orchestra" albums, because I like everything I've heard by him. He does a really cool guitar version of that Christmas classic "Sleigh Ride." I had downloaded an mp3 of it once, but that was one of the files I lost in the crash a couple of years ago.

The Knife Feels Like Justice is another of those albums that I can easily say is one of my favorites, regardless of genre. There might be a couple of not-quite-so-strong songs on it, but it's still a great album, overall.

I think Brian Setzer doesn't get as much credit as he should. It seems like a lot of people I've known just sort of dismissed him as "that Stray Cats guy." Their mistake.
Posted by AlanDP at 5:31 PM