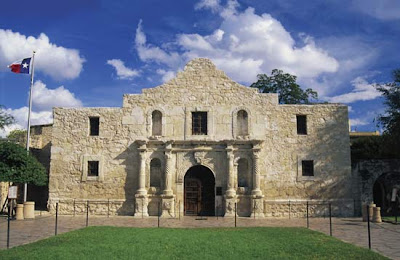 "The people died right here in this room, Daddy?"

We are on vacation this week. I had decided a few weeks ago that one day this week the kids should see the Alamo, since they had never been there before. As usual during the summer, the place was full of tourists. Someday I'm going to go when the weather is abysmally cold and miserable, both to cut down on the outsiders and to better get a feel for that cold March morning all those years ago.

"What part is this, Daddy?"

"The church building. It's called the chapel."

"Were they fighting in here too?"

I don't know how many times I've been there--I've lost count. Surely more than a dozen, mostly when I was a kid. When I was very young I had no trouble "feeling the ghosts," in my young mind I heard their screams of anger and fear as they had fought and died. I still try to "feel the ghosts" and remember the carnage and violence that filled those tiny rooms in the last minutes of the battle.

"This is where the ladies and children stayed."

"There were little kids here?"

Although my daughter seemed to enjoy it, to my son it went beyond enjoyment into something perhaps approaching wonder and awe. He spent the most time studying the battle action panorama, asking me to lift him up so he could see it better. He is fascinated with maps; a realistic three-dimensional map such as the panorama was the best thing he had ever seen.

Although the pilgrimage to the Alamo is an essential part of Texiana, I didn't want to stop there. We had all day, and I wanted to show them what the real Spanish missions looked like. Tourists who go to the Alamo and stop there are cheating themselves; everyone should also at least pay a visit to Mission San José. So we drove across downtown to Saint Mary's and from there went south until we hit Mission Road. There are perhaps shorter ways to get there, but the winding road down alongside the river has always been my favorite path when visiting the missions. First we hit Mission Concepción. 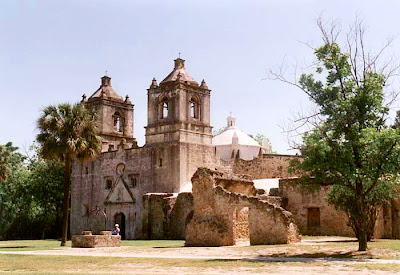 Concepción is the second-best preserved after San José, and has lots of interesting architecture to look at. According to info at the site, it was the scene of many religious festivals way back before the walls began to crumble. 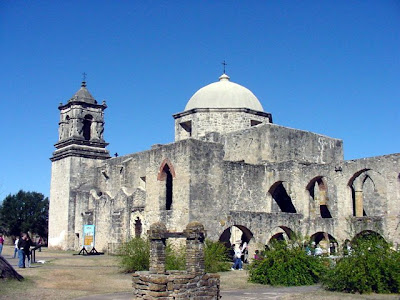 Mission San José was the largest of the original string of missions, and is still the best-preserved. This photo shows only the chapel and some accompanying walkways behind it, but all of the outer walls are still intact. This is really the one you need to see. Many people have trouble getting it into their head that there is really almost nothing left of "the Alamo," which was really Mission San Antonio de Valero. It's hard for some to imagine the vast, open acreage that was encompassed by the courtyard and the living quarters, what with downtown San Antonio crammed up against it on all sides. Seeing San José helps to solve that problem. 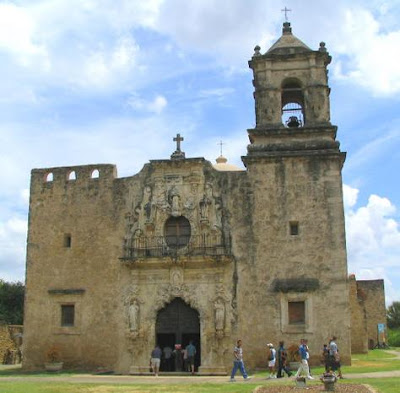 Here's a shot of the front of the chapel. When I get my own photos developed, I might be able to post some that show the vastness of the inner grounds. That oval window over the door is supposed to be a fairly rare architectural touch, from what I've read. I'm not an architecture buff or anything like that, I just enjoy the feeling of oldness from slowly walking these grounds. I can feel the weight of the ages in those old stone walls.

By the time we finished at San José it was past lunch time, but the kids were asking if there were any more missions. I told them there were two more, but they were small and there wasn't a whole lot to see there. "Can we see them anyway? Please!?" Well, of course. I was just playing the day by ear and doing whatever they wanted to do anyway, and if they wanted to see the other two, then off we would go.

I stayed on Mission Road, and had some fun occasionally with my own personal landmarks as we drove along. "You see that blue paint on that fence right there? I put that there so I could find the water meter." Heh. 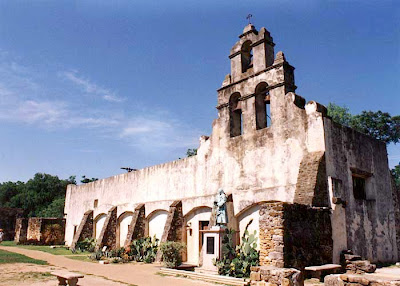 Mission San Juan was never completed, and how there is almost nothing left to show where the outer walls were, or in some cases, would have been. There is now only this small chapel and the priest's quarters. Although the Alamo had been abandoned as a place of worship long before it became a fortress, the other four mission chapels are still used as places of worship by active parishes. A brief clockwise walk around the grounds and we had seen about all there was to see. There is even less left of Mission Espada. A tiny chapel and the priest's quarters to the left. Some low stone ruins are all that's left of the walls.

But there is one other site of interest that is connected with the missions that most people might not have heard of: Rancho de las Cabras. Espada was a ranching mission, and the people living nearby had a problem with the livestock damaging their crops, so a ranch was established some 30 miles away near present-day Floresville and the livestock moved there. It was not only a ranch, but essentially built like a small mission, with full outer walls, defensive bastions, and a small chapel. The little that has been rediscovered now are ruins, and it is an important archaeological site.

We stopped in to the visitor's center at each mission so my son could get a brochure with a map of the grounds on it. He how has a complete collection of San Antonio Mission maps to add to his growing map collection.

It began raining on us as we were walking Espada. It turned into a deluge as we drove home.

And of course, a good time was had by all.
Posted by AlanDP at 5:17 PM