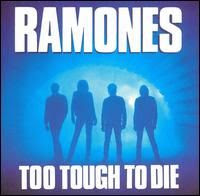 Today's tape rip is my only Ramones album. Released in 1984, but I didn't buy it until three or four years later, about the same time I was getting several other punk records and tapes (note to self: check the shelf for the Extra Hot Sauce tape). When I bought it, I had intended to get several other albums of theirs, but my priorities kept shifting and I didn't have infinite funds for buying records, unfortunately. I guess "Chasing the Night" is my favorite from this one. Or maybe "Howling at the Moon." It's a toss-up.
Posted by AlanDP at 4:03 PM