A Thousand Years of Prohibition

Last night before I went to sleep I was studying the old hymnal I had mentioned previously: Treasury of Song. This is the oldest hymnal I have. By checking copyright dates I had guessed that it was published no later than 1920, but later I noticed that someone (probably a seller somewhere back down the line) had penciled in the year 1917 inside the front cover.

1917. Remember that year? Of course not. But what was the Big Thing at the time? Something that would affect our Constitution and change the course of history in a couple years' time?

[NOTE: The paper is very yellowed, really browned, so I tried to make them more legible by adjusting the brightness and contrast. Click all images to enlarge.] 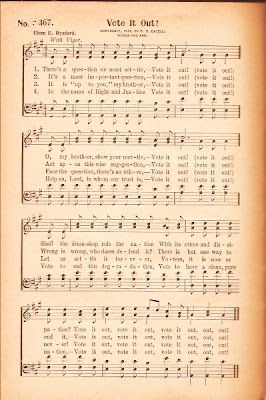 Perhaps the ultimate manifestation of nannyism in the history of the United States: Prohibition. In the back of this old hymnal are included five "temperance songs." Written in standard SATB harmony suitable for congregational singing. I find this horrifying. The above song isn't all that atrocious (just wait!). Only a statement of purpose and a song of encouragement. 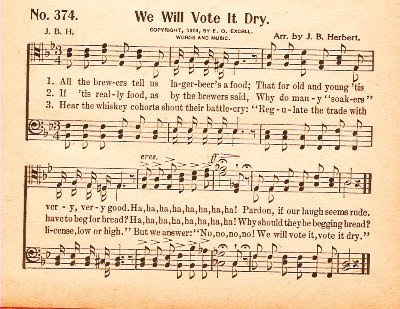 This little ditty was written for a male quartet, as shown by the tenor clef in the top staff. This one is almost silly. I could easily sing this myself, if I were drunk enough and feeling especially ironic. In fact, it looks like the lyrics were written by someone who was drunk at the time.

Now it gets a little scarier. 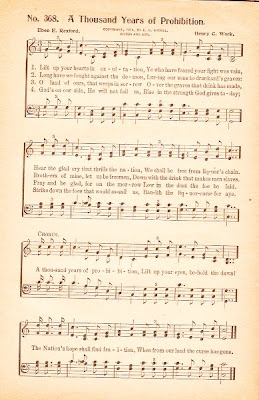 "God's on our side." In spite of: 1) According to the apostle John, the first miracle Jesus ever performed was transforming water in wine. Good wine. ("Why did you bring the best wine out last? You should use it first, and save the cheap stuff for after everyone's drunk!" --my paraphrase). 2) Paul stated that "a little wine is good for the stomach." 3) Deacons of the church are prohibited from being "given to much wine." (Although I will admit that elders are prohibited entirely). So if the old Baptists (I'm about 90% sure this hymnal belonged to a Baptist congregation--based mostly on the piano grace note notation in many of the songs) were really paying attention instead of just being a bunch of nannies, they would have known that the evil is not the drink itself, but how the drink is used.

I saved the best two for last. 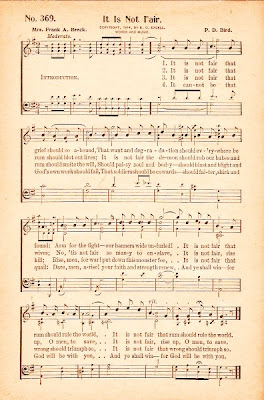 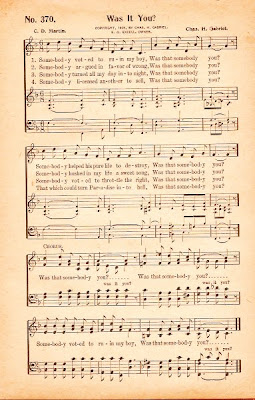 It is not fair that I can't control myself. Was it you who allowed me to make the choice as to whether I'd be a useless drunk or not? Was it you who voted to ruin my boy? Because I raised him, so it's definitely not my fault. Sure, he's an adult, but it can't be his fault, either. It's yours, for giving him the choice.

I'm sure the nannies have been with us from the beginning of time. But this was one time when they essentially took over the government. And you know something? We can directly thank them for many of the anti-gun laws we have today, especially the laws concerning fully automatic firearms.

It was Prohibition that gave organized crime its start. Nobody was going to quit drinking, and supplying the populace with illegal liquor gave birth to organized crime. It was mainly due to the bad publicity (stirred up by still more nannyists, I'm sure) of gangsters using machine guns that made it nearly impossible today for the average citizen to own any such gun. There was a time when anyone could order a "Tommy gun" by mail, and I'm sure it made one heck of a coyote gun.

Note: I'm not saying we wouldn't have organized crime if not for Prohibition. There are plenty of other prohibited things that would still have given us organized crime today (drugs other than alcohol, of course).

It seems that almost no one learned a lesson from the failed experiment of Prohibition. But of course the nannies never learn anything, except that they didn't do it hard enough.
Posted by AlanDP at 6:39 PM