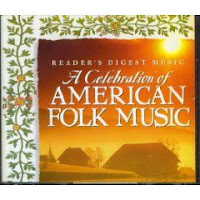 My wife got this collection from somewhere. I think she may have inherited it after her mother passed away a couple of years ago. There are spots where the tapes are starting to get a little warbly, so I've ripped them all for her and will be burning them to CD so she can play them in her car.

Folk music isn't a big part of my collection, but I have always been interested in it because that's where it all started. Some of these songs are can only loosely be defined as "folk," and a couple of them aren't even American.

But then of course it was slapped together by Reader's Digest, where brevity is...wit.

An interesting collection, in spite of some weird inconsistencies. Four Bob Dylan songs but none actually sung by Dylan (which may be a blessing, on second thought). Too much Joan Baez. Each tape is divided into two topics, one per side, but sometimes they don't entirely make sense.

Tape 1, Side A: The Legends of Folk
Okay, Woody Guthrie doing "This Land is Your Land" fits, but "Honeycomb?"

Tape 1, Side B: Timeless Troubadours
Three songs by Bob Dylan start this section, but covered by others. A cool song in this section that I'd never heard before is "The Last Farewell" by Roger Whittaker. Oddball song: "Kumbaya." Yes, yes, I know. But couldn't someone somewhere put together a folk music compilation and ignore it for once?

Tape 2, Side A: All-Time Folk Classics
"The Lion Sleeps Tonight?" Really? "Silver Threads and Golden Needles?" I think some of these songs were chosen by throwing darts at a corkboard. Nothing wrong with either of those songs, but "all-time folk classics?"

Tape 2, Side B: Unforgettable Folk
Pat Boone? Only Reader's Digest would put Pat Boone in the category of "unforgettable folk." Too bad they didn't use "Rock Boll Weevil." "Me and Bobby McGee" I have no problem with, except that this version is by Kenny Rogers. WTF?

Tape 3, Side A: Folk-Country
Here's where it starts to get interesting. Some old country songs that I mostly remember from childhood, and which don't get played on the radio anymore, even on "classic country" stations, like "Sixteen Tons" or "Wolverton Mountain." Although I don't know how "The Highwayman" got on here. I like that song, but "folk-country?"

Tape 3, Side B: Western Folk
This is the cowboys, guns & Texas section, complete with the obligatory "Riders in the Sky." Although I've always considered the Sons of the Pioneers as the definitive version. This one is by Burl Ives, who turns up in almost every section of the collection. Also includes the classic "Ringo," by that master of old-school cowboy rap, Lorne Greene.

Tape 4, Side A: Story Songs & Sagas
Songs that tell stories, apparently, and other than that it's pretty much a mish-mash. The Kingston Trio, Jimmy Dean, and Harry Chapin are all included. (Jimmy Dean: the other master of old-school country rap).

Tape 4, Side B: Folk-Rock Favorites
This is the "we're down to one side so we need to stick a bunch of songs on it so it won't be blank" section. I'll give them credit for using the original version of The Band's "The Night They Drove Old Dixie Down" instead of copping out with the Joan Baez version. But "Vincent?" Another one I don't get. I think there's probably someone at Reader's Digest who puts "Vincent" in every compilation somehow, regardless of the theme of the collection. America makes an appearance here with "A Horse with No Name," and Van Morrison with "Brown Eyed Girl."

Okay, so I poked some fun at this collection, but I really have no problems with any of these songs, except maybe "Kumbaya" and that one song by P*t* S**g*r. It's just that the way they put it together doesn't always make a lot of sense, and it seems there are songs and artists that should be on such a collection as this, but aren't (Pat Boone gets on here, but Peter, Paul & Mary don't?). Seventy-six songs, nearly four hours of music. Or should I say: nearly four hours of what Reader's Digest considers to be definitive American folk music.