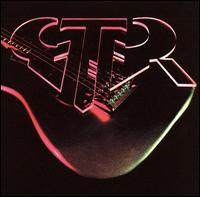 I was surprised to find this in my collection, because I have no recollection at all of buying it, even though I know I must have. I'm pretty sure I didn't buy it in 1986, when it was a new release. It must have been at least a couple of years later.

I doubt if I can say anything about them that you don't already know. They were a "supergroup," that is, a group mostly formed from members of other famous groups. One interesting thing is that the two founding guitarists (Steve Howe of Yes and Asia and Steve Hackett of Genesis) got top billing over the lead singer. They even got bigger photos on the back cover, where the singer only got a small picture on the bottom row along with the bass player and the drummer. By the way, Jonathan Mover, the drummer, also played for Marillion at one point. Wikipedia has some interesting trivia regarding the lead singer, Max Bacon.

Well, one of their big ideas was to use guitar synthesizers instead of just electric guitars, but their idea may have been greater than the technology of the time.

Track list:
Side One:
1. When the Heart Rules the Mind (their big hit single)
2. The Hunter
3. Here I Wait
4. Sketches in the Sun (instrumental)
5. Jekyll and Hyde

It's the kind of very tight, polished, technically brilliant stuff you would expect from the progressive rock crowd.

This was their only album, except for a live recording from the King Biscuit Flour Hour which I think was bootlegged. I discovered that there are a lot of collectible editions of this album floating around, although they all appear to be various CD versions. Also notice the unusually high "best price" at the obligatory Amazon link below.

An essential album? No. Enjoyable listening and a good example of 80s prog rock? Yes.