A Cambridge academic has uncovered a book of jokes which casts the Romans in a new and less serious-minded light.

Dating back to the third century and written in Greek, Philogelos (or Laughter Lover) is believed to be the oldest work of its kind.

The book contains 265 jokes, which inevitably vary in their appeal to modern readers. The collection of gags debunks the popular myth that the Romans were 'pompous, toga-wearing bridgebuilders', according to Professor Mary Beard.

A barber, an absent-minded professor and a bald man go on a long journey together and have to camp out overnight so they decide to take it in turns to watch the luggage. The barber volunteers for the first watch while the other two sleep but soon gets bored so he decides to pass the time by shaving the professor's head. When his shift is up he wakes the professor who pats his head and exclaims: 'God, that barber is a real idiot, he's woken up baldy instead of me.

And (which gave me the title):

'Doctor,' asks the patient, 'whenever I get up after a sleep, I feel dizzy for half an hour, then I'm all right.' The doctor replies: 'Then wait for half an hour before getting up.'

So yes, those jokes really are more than a thousand years old.

UPDATE: Brer emails me evidence that this collection has been "discovered" before.

Attached is a page from Maria Leach's 1961 book, Noodles, Nitwits, and Numskulls. In her notes she, er...notes, that she collected it from W. A. Clouston's 1888 volume A Book of Noodles, who credits it as an ancient Greek "noodle story". 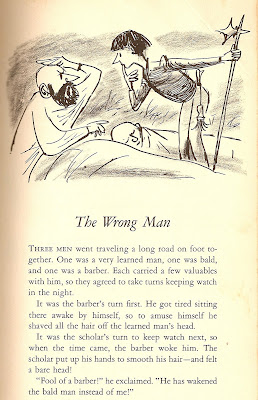