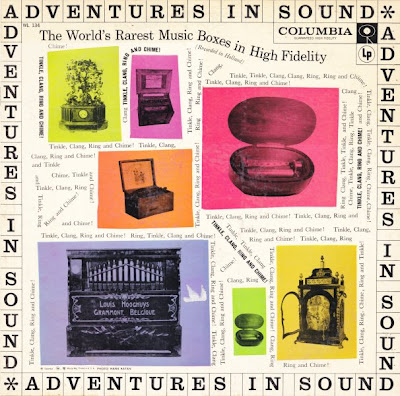 Although I think a more accurate title would be "Tinkle, Clang, Ring, Chime, Whistle and Pipe," this is another strangely obscure and fascinating record that is part of my collection. I picked this up long ago at a curious place called Yesterday's Warehouse in Seguin, Texas. (Or I should say: it once was in. One day the owner decided to do other things and closed it down. But I like to pretend that, like all the best strange little shops, it one day simply--mysteriously--disappeared.)

I'll let the cover notes do the introduction.


The astonishing and intriguing sounds heard here stem from one of the world’s greatest collections of music boxes and musical instruments, located in Utrecth, Holland. The instruments range from a tiny waistcoat-pocket music box to the mighty sounds of Dutch street organs, all of them mechanically reproducing music of remarkable charm through means of truly remarkable ingenuity.

The origin of music boxes and street organs, together with other mechanical musical instruments, is traced back to the tower clocks of the late Middle Ages, the carillons. The original carillons consisted of a combination of four bells, but later on, Flemish and Dutch towns were supplied with a more extensive sequence. The Flemish clock-maker Bartholomeus Koecke of Aals, completed the mechanization of the carillon in 1487, by inventing the so-called “musical barrel.” This consisted of a rotating cylinder, on which changeable studs or pins had been fixed. These pins brought into movement, by means of threads, little hammers, which reproduced the sound of the bells. This cylinder system became in turn the basis for music boxes; the rotating cylinder was reproduced in miniature with “goupilles,” minute iron needles, which as they turned, struck the teeth of a metal comb. Later inventors refined and expanded the basic idea, until such latter-day wonders as the Spanish piano organ or the street organ “The Arab” came into being, with their complex organization of musical sounds.

The record consists of 19 tracks; however, almost all the tracks are made up of two, three or four separate pieces, so there are actually 40 different pieces represented by many different instruments.

It's interesting to me that, long before electronic technology gave us the means to easily create pre-programmed music that could be played over and over again at will (as long as the batteries don't run out), people were creating mechanical music machines that essentially served the same purpose. This record covers a wide variety of antique and ancient musical machines, from tiny pocket-sized music boxes up to larger table-sized boxes and even mechanical street organs.

The origins of many of these melodies are now lost to us. For example, here is an ethereal piece mysteriously although appropriately titled "Unknown melody from an approximately 300-year-old English bracket-clock."

...an unknown melody played on a miniature waistcoat-pocket playbox. Boxes of this type, originating in the eighteenth century for the use of dandies and their ladies, were carried in the pocket and the mechanisms were also built into watches, snuffboxes, powder boxes and the like.

There are also examples of the "cafe music box," which was the precursor of the modern jukebox, and were even made with coin slots.


The sonorous music...comes from large rotating metal plates, which were interchangeable in the boxes. Catalogs for such boxes could contain as many as a thousand different plates, and often the boxes themselves had slots to receive the coins of the customer.

Here is an example of a piece taken from such a music box, except that this one was built like a miniature organ rather than using the large metal plates.


The Serinette...is a small pipe-organ used to teach singing to canaries. Originating in the eighteenth century, the Serinette uses not only the rotating cylinder, but a series of thin metal pipes, through which air is expelled by means of a bellows. There are twelve tones.

The record concludes with some examples of the larger mechanized organs, such as this one that was referred to as "The Arab." (No explanation for why it was called that).


...the celebrated Dutch street organ “The Arab.” This organ is a descendant in style of the old fair organs, developed by the Belgian Leon Warnies. It is easily manipulated, despite its size. Here the cylinder system of reproducing music has been replaced by the pneumatic and keyboard method, capable of producing a wide and wonderful series of sounds. The music books for this machine are made of cardboard, folded in zig-zag fashion, into which the music is punched, or perforated.

A mechanical music machine built like an organ and programmed with punch cards!

It's an old record, and although undated I think I can safely estimate 1950s or 1960s. And when listening to it, one must keep in mind that this is not a recording of modern devices constructed to mimic antique devices. It is actually a recording of very old devices that still work. Included with the music are the clanks of wood against metal and the occasional creak of a spring. The price of $1.75 was penciled on to back of the cover, and for the brief glimpse that this record has given me into the ancient art of mechanically reproduced music, I consider it well worth the price.

UPDATE:  Now that I have high speed access, I will begin posting these tracks to YouTube.  Just visit my channel at youtube.com/blogonomicon and check the list.
Posted by AlanDP at 7:07 PM