Max Morath - The Best of Scott Joplin and Other Rag Classics (1972, LP) 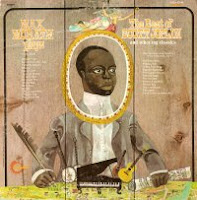 This is another album that I bought used, although I'm not sure where. It has been at least 20 years since I bought it, and at the time I thought it would be a good idea to get it because at the time I had no other ragtime music in my collection. I still don't.

But that's not to denigrate the genre. It's just that ragtime is not exactly the kind of music one can just happen across at your local mall music store. Ragtime has an important place in American history, being a musical form which originated in North America by African-American musicians, such as (and perhaps most notably) Scott Joplin.

Ragtime does have some tie-ins with the later genre of jazz (another form of music with American roots), but unlike jazz which is mostly improvisational, ragtime was mostly a "written" music, which in a way makes it more like classical music than like jazz. It is most heavily based on the piano, although other "folk" instruments are also sometimes used.

Anyone interested in American musical forms will be making a mistake to ignore ragtime. To download a very interesting example of vocal ragtime (in *.ogg format), check out the Wikipedia entry on ragtime. This entry also has several other links that are worth investigating.

But onto this album specifically. It is a two-record set, record one being pianist Max Morath playing various Scott Joplin pieces along with some pieces by other ragtime composers. Record two is performed by The Original Rag Quartet, consisting of Morath on piano accompanied by banjo, guitar and bass. There are also a couple of original "modern" ragtime pieces included, composed by Morath himself.

I don't have any sound samples for you on this one, but I think it is almost impossible to have grown up in the United States and not have heard some ragtime at one time or another. For example, who hasn't heard "The Entertainer?" I'd hazard an assumption that this is likely Joplin's most well-known composition.

Ripping results: Good, but not perfect.

Amazon does have a CD release of this album available, but some tracks were omitted that were on the original vinyl release. The original has 26 tracks. They have several other ragtime CDs from Max Morath also.