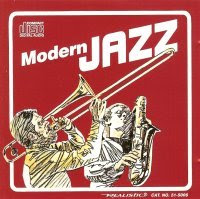 Back in February I wrote about a CD called First Class Jazz. It was a CD that was released by Realistic (as in Radio Shack), and was one of several digitally-recorded CDs that they carried in the early years of the compact disc player.

A few weeks ago someone came across my post and offered to email me another jazz CD put out by Radio Shack, so over the course of several days, one track at a time, I downloaded the entire disc via email.

In 1986 this would still have been quite new(-ish) music, and would have been a great introduction to for someone new to the more fusion area of the jazz genre.

David Grisman is a "newgrass" composer and mandolin player who creates music that is jazz heavily tinged with bluegrass. I haven't heard much of this kind of music, but everything I've heard, I liked.

Joe Sample I've heard of before, mostly via KRTU. He is a keyboardist who was also the leader of The Crusaders before they went their separate ways.

I'm also somewhat familiar with Larry Carlton (guitar player), Yellowjackets and Spyro Gyra. Those two groups are considered "fusion" by most folks. I have one Yellowjackets CD. Spyro Gyra is a group who I've always wanted to investigate but never got around to it.

I had never heard of Cabo Frio or Skyhawk before. Cabo Frio has a website where they call themselves "smooth jazz" (gack!). Maybe they market better that way. I can't find anything about a group called Skyhawk.

A very cool collection. Whoever put these discs together for Radio Shack knew what they were doing.
Posted by AlanDP at 7:06 PM