The Acid Trip: A Complete Guide to Psychedelic Music 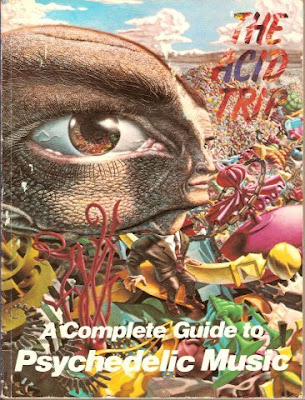 I have a few records that I plan on hitting in one post, but before that I should mention this book. I don't remember where I found it. It wasn't Hastings, because the remnant of the price sticker on the back cover is not a Hastings price sticker. But I guess that isn't really important. It was purchased sometime in the late 80s and provided me with a plethora of information on obscure bands I had never heard of, and probably never would hear of again. Published in 1984 in England by a place called Babylon Books, and written & compiled by someone named Vernon Joynson. This book has the look of something put together with a copy machine. Well, maybe it's not that bad. But this was a huge field of endeavor for one man to try and catalog. The reproductions of record jackets are small and in grayscale, so sometimes it's kind of hard to make out what the picture is supposed to be.

If you would, take a moment now to scroll down to the bottom of this post and look at the best price for a used copy at the Amazon link.

¡Ay caramba! The original price sticker is mostly removed, but I'm pretty sure I paid less than $20 for it. I seem to have an image of the original sticker in my mind which reads $14.95.

Anyway, the various bands in this book are broken into section by geography, with one section devoted entirely to Texas psychedelia, and if I hadn't already decided to buy the book just on general principles, that would undoubtedly have cinched the deal. Joynson's definition of "psychedelic music" seems to be a little loose because he catalogs some groups that I would not consider psychedelic, such as The Associaton.

Part 1 covers San Francisco, understandably. Part 2 covers the west coast, folk/rock, "rock/blues & heavy rock" (his words) and southern California. Part 3 covers Texas. Part 4 is for "the rest of the USA." Part 5 covers England, and the book ends with a post script in which he speculates on the rebirth of psychedelia.

The book is a wealth of now-unknown bands who weren't even a ripple in the puddle of the Rolling Stone Record Guide (another book that I read from cover to cover back in the 80s). A great many of them came and went so fast that they were hardly noticed. Some of the bands included members who later went on to become famous, either in other bands or solo. For example, just opening at random, I find that Yes/GTR guitarist Steve Howe was in a band called Tomorrow who released one eponymous album in 1967.

Joynson's post script on "Psychedelia Reborn?" focuses mostly on the Psychedelic Furs (another of my favorite groups) and another group called The Soft Boys who I have otherwise never heard of, then briefly mentions numerous other bands without covering any of them very extensively, but I note The Church is mentioned in this section.

So later on if I refer back to this book in future posts, you'll know what I'm talking about.