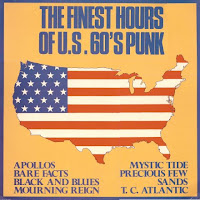 I'm pretty sure I found this at Hastings. I suspect that the manager came across it when he was looking for something else that I had asked him about and thought he'd put it on the rack to see if someone would buy it. This is another record of which there was only one on the rack and was never replaced after I bought it.

This album comes from Eva Records, which is only one of many niche labels under the umbrella of FGL Productions in Paris, France. Each label under FGL focuses on a specific genre of popular music, and the focus of Eva is on punk/psychedelia in the United States during the 1960s. None of the three records I have from Eva are dated, but my best guess is that this was cut in the early 80s. It has since been re-released on CD and is available at Eva Records, but you'll have to pay in Euros.

Very little or nothing was known about these bands by the compiler at the time of its recording. Fortunately, thanks to the internet, I have found more information about some of them and have included links below. I believe that all the songs were originally recorded straight to 45; I don't think there are any master tapes to be found anywhere. I'm also pretty sure that this album was made simply by recording these old 45s. Each band featured gets two tracks, the A and B sides of old singles. 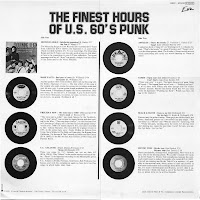 It seems a little odd to me that a label would have such a narrow and relatively obscure focus, but there you go. And I'm glad they do this. It's not the kind of thing that is very popular at all anymore, but they have done a good job of preserving this old music. Most of it is typical garage rock of that time: blues influenced, walls of fuzzy guitars, here and there an organ or a harmonica. The only band on this collection that I would consider psychedelic is Mystic Tide.

I'm happy to have this record in my collection, for historical value if for nothing else. Click the image to the left for a much larger version if you want to read all the liner notes.

I am not able to upload any sound samples, but if you click the link above for Bare Facts it will take you to their page at CD Baby where you can hear samples of these two and two other songs. Click the other links for helpful websites with more information about these almost lost 60s bands.

Next time I'll cover another pair of records from the Eva label devoted to what many seem to think was one of the greatest bands that almost was, and they were from Texas.
Posted by AlanDP at 7:53 PM