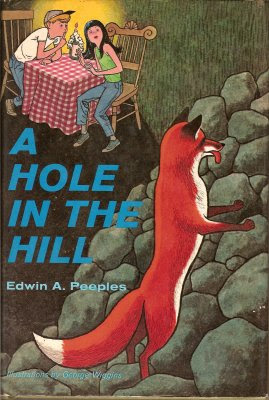 Colin Stowe watched the winter break. He watched everything that the world and the weather and the animals did. He feared that if he didn't go to look, it wouldn't be able to happen. Somebody had to watch the melting of the ice and the little streams that grew and flowed down the banks and the chickweed growing green and the early tendrils on the briar that looked like rags of soiled cotton cloth.

It's no wonder I loved this book when I was a kid, and as I read it again recently, I found myself wondering how much Peeples' style has influenced my own attempts at writing. I also realized a kindred spirit in the main character of Colin Stowe; I was very much like the boy described above when I was young. Except that we never had ice, and my own interests fell more in line with watching the fall and winter come in. I was always more fascinated by the ending of nature's cycle than the beginning.

Here is the kind of description that makes me wish I had written it.

But enough rain fell to make the grass grow fast. And the deep green grss looked soft as putty and so green it would stain like fresh paint.

Peeples writes so that you don't only see what he is talking about. You feel it.

Told mostly from Colin's point of view, he is a boy who thinks poetically without realizing it, and although he has no trouble speaking with other kids, when he tries to talk to grown-ups he falters and has a hard time making sense. Or perhaps that's just how grown-ups hear him because they don't listen to him closely enough. He's only a kid, after all.

Most of the story takes place during a summer when a severe drought was going on. Colin, his brother Geoffrey, and two new kids from the farm next door named Deirdre and Ian (twins who are of similar age to Colin) start out simply trying to pass the time in the country. They build a small dam over a stream to create a pool deep enough for wading, until Deirdre's and Ian's teenage brother Malcolm and another older kid who is a bully come along and destroy it. Then they hear a story about an old cave that is supposed to be in the area that was rumored to be part of the Underground Railroad. They go searching for it but can't find it, so they dig a tiny "cave" of their own but eventually become bored with it. Following a fox that Colin has named Voltaire because of something his mother had said, they find a small hole that leads into an enormous cave and they realize they have found the old runaway slave cave.

Although we don't get to learn much about Deirdre's and Ian's personality quirks (except that Ian is kind of dull and will do anything for ice cream and Deirdre is much more courageous than she believes she is), the book is full of odd details about Geoffrey and Colin that paint them as interesting and multi-layered children. Colin sees and hears everything, he loves to roam the fields regardless of the weather, he watches animals and people closely and once was even able to feed Voltaire by hand. Geoffrey usually prefers to stay indoors reading and listening to classical music. He wants to grow up to be a chandler and collects hats. Throughout the book he wears an old tricorn hat and Colin wears a Confederate soldier's forage cap that Geoffrey gave him.

As the summer passes, the cave is discovered by the grown-ups, and although Colin's parents try to protect it, it is soon overrun by tourists and treasure hunters. But there is a further secret, known only to Colin and Deirdre. A pile of rocks in the recesses of the cave conceals another small hole that leads into an inner cavern where there is a large pool of water and the ghost of a slave named Fewkes Gillespie. The drought becomes so severe that no one can even take a bath, and only Fewkes can make it rain. But to do so, he needs some children to help him. Colin and Deirdre must work to keep the inner cavern secret from everyone else, keep checking on Fewkes until the time is right for him to make it rain, and defy their parents to keep entering the cave. And in the end, the biggest problem is, perhaps, how to reconcile the conflict between each other's parents so that they can live in peace and friendship.

This is a great children's book that can still be read by a grown-up, if I count as a grown-up. Also, I believe it must be the same edition I read when I was about 12 years old, because when I came across the first illustration I was struck by such a flood of memories that I had to stop and just stare at it for a few minutes. I had forgotten the illustrations and seeing that first one again brought me up short.

I found this copy at half.com. They still have several used copies listed at less than $10, and a couple of new ones around $25.
Posted by AlanDP at 4:09 PM