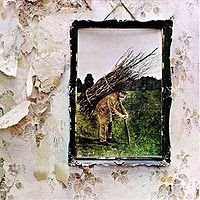 This is my one and only Led Zeppelin album. If you assume that I bought it because of "Stairway to Heaven," you would be assuming correctly. Okay...I realize their important place in rock music, and that they may be the greatest rock band ever, and so forth and so on...but their music has never really appealed to me. Also, Robert Plant would have to be on my list of the most annoying vocalists ever. I don't mind hearing stuff by them when it's played on KZEP, but I have never had the desire to go out and buy their albums.

I am somewhat comforted to see that it has a sales rank of #319 at Amazon, which pretty much buries that horrendous Johnny Hates Jazz record. Read the comments from the folks who gave it one star though, they're pretty funny, especially the one about Howard the Duck.

Of course Amazon has sound samples of the whole album. The newest version is a CD digitally-remastered version that comes with a booklet of extensive notes (according to them) which are not part of the original LP release. But does that justify the price of $15 for a new copy? I don't know. Maybe if you're a LZ fan.

Ripping results: perfect, but it took a lot of work. Track #1 was scratched up pretty bad, and there were so many artefacts left over from DePopper that I ended up removing all the clicks manually. I also had to manually clean up "Stairway to Heaven," although it wasn't nearly as bad.

If you don't have it, I guess you should listen to it at least once, and then make up your own mind.