Kenny and the Kasuals - two compilations from Eva Records 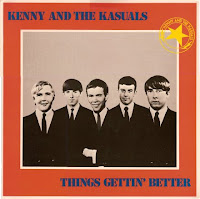 Well, to begin with, the album cover photo to the right is a horrible picture, and looks retouched to me. With the lead singer appearing as some sort of slightly less demented older brother of Alfred E. Neuman, one must wonder how they ever did anything. The photo below left is a much better one, in my opinion.

Kenny and the Kasuals were one group that I read about in Acid Trip: The Complete Guide to Psychedelic Music and about which I was intrigued. They cut one album in 1966 of which there were only 500 copies pressed. It was called The Impact Sound of Kenny and the Kasuals Live at the Studio Club. It later became extremely collectible and demanded sums in the hundreds of dollars. Collectors referred to it simply as Impact. It was later reissued in the late 70s and the reissues don't have any collectible value, however I have never been able to find even the reissue anywhere.

Back in the 80s I would often special-order albums from the big Hastings catalog that they kept out on a shelf for customer reference. There was nothing by this group in it. So I asked the manager about them. He had never heard of them but said he's keep an eye open. Several months later I was in the store and he brought out one of these pictured albums and asked me if I was still interested. I bought it. A few months later he showed me the other one, so I bought it too. This was only one instance of him going out of his way to hunt something down for me that impressed me a lot and is one reason why I kept going back there. 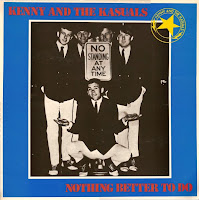 These two records are two more compilations from Eva Records, who specialize in obscure, mostly psychedelic bands from the 1960s U.S. They have no collectible value but are the best I could come up with.

Kenny and the Kasuals started out as The Illusions and were apparently quite popular in the Dallas area during the mid-60s. They cut several singles, all in mono, as was their only album and as are these two compilations. They did a lot of covers of popular songs and some originals. Some of their originals are quite catchy and I enjoy hearing them turn up in the shuffle.

Eva Records had at one time issued a CD of both of these albums on one disc, but it is no longer available.

The lead singer, Kenny Daniels, was drafted and served a tour of duty in Viet Nam, which pretty much ended their musical career. They did reform later and played on the nostalgia circuit, and a version of the band lead by Daniels is still active today. Much more information can be found at the official Kenny and the Kasuals website. Full liner notes for these two records are below. Click for the large versions.

You can visit my tumblr site to hear their song "Nothing Better To Do." 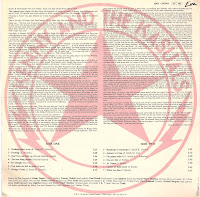 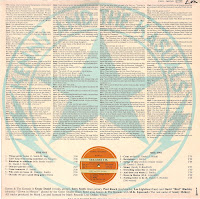