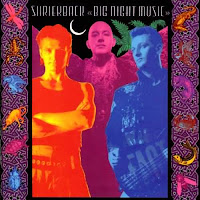 Woo hoo! I now have a digital version of Shriekback's Big Night Music, thanks to a reader who I have already thanked privately and profusely. I have not heard every one of their albums, but it seems to me that they produced two really fantastic albums: Oil and Gold in 1985 and this one from 1986. After this one, some of the primary members of the band quit, and although their lead singer/songwriter stayed with the band (he basically was the band by that time), their music seemed to get less imaginative and more formulaic.

It's hard to pick a favorite between the two. The music, if you are not familiar with them, is heavily electronic dance pop, but the lyrics are very intelligent and imaginative, and the music tends toward the darkness. Barry Allen's vocals make him sound (as I've said before) like he's always smiling an evil smile. These guys deserved to get a lot more famous than they did.

This one's out of print. As of this writing, new copies at Amazon start around $120, used ones around $20 (but I can guarantee you that will change). They have sound samples of all tracks.