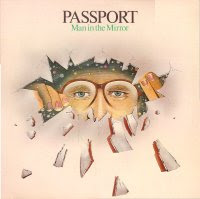 I have slowed way down on LP ripping because I'm having to manually edit some records and I'm waiting until I finish before I do any more. However, this is one that ripped perfectly.

Passport is a fusion group fronted by German saxophonist and composer Klaus Doldinger. Arguably fusion, perhaps. "Fusion" being a term used to describe music that is jazz with elements of pop/rock, or pop/rock with elements of jazz. If one can consider this album fusion, then I suppose it is the first album of that genre that I ever purchased. Used, somewhere, back in the 80s. My own tastes in fusion run more toward groups like the Pat Metheny Group and Weather Report.

Doldinger has been a member of, or fronted, several other groups besides Passport. He started back in the 60s and is still active today. This record leans more heavily toward pop than jazz, and is a mixture of instrumentals and songs with vocals. The first track, "Glass Culture," is an instrumental that sounds like it could have come from an Alan Parsons Project album.

The current line-up of Passport, according to Wikipedia, consists of drums/percussion, guitar, keyboards, bass, and of course Doldinger himself on tenor sax. It looks like they are much more popular in Europe than they are here. My opinion is that this is not a great fusion album, but it isn't bad for (somewhat) jazz-flavored pop music.

This is my only Passport album but I would not be averse to aquiring more. I'm just not going to go out of my way for any of them. Please feel free to recommend others if you are a Passport fan.