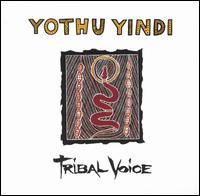 Several years ago, at a previous job, a co-worker came in one day with a box of CDs that he no longer wanted and was selling for a dollar each. I eagerly went through the box and as soon as I saw this one, I knew I had to have it. I had never heard of them before, but my instincts told me that this was going to be a good one.

Yothu Yindi (which means "child and mother" in the Yolngu language) is a mostly Australian aboriginal band who do a mixture of western rock music and their own versions of traditional aboriginal music. They are the only band I have ever heard use a didgeridoo in rock music.

Tribal Voice was the second of their six albums (the last released in 2000), and includes their biggest hit, "Treaty." Understandably, their music is often political in nature, but they have worked to promote understanding between aboriginals and non-aboriginals, and the core group is backed up by numerous musicians from both groups. 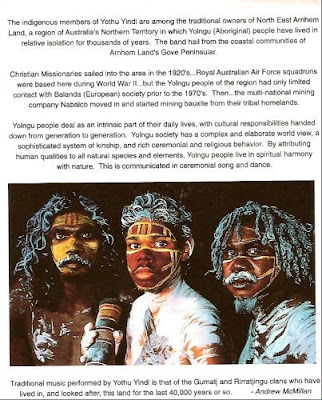 I can't think of anything more to say about it, except that it has some really great, interesting stuff and it quickly became one of my favorite albums. Some members of the group have been connected with tragedy and violence, and you can read all about it if you want at Wikipedia, and learn more about them at the Yothu Yindi website.