Focus and aim for the head 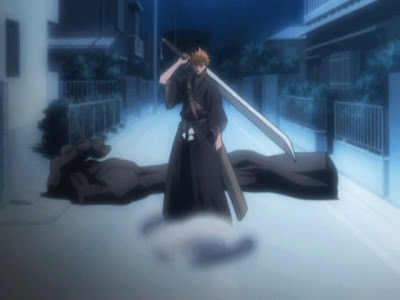 Nothing important to post. Just that old-timers may remember how I've posted a couple of studies of some anime shows that I like, especially Hellsing. There was that one about the "guns of Hellsing" that drew so much traffic that it wrecked my bandwidth when I was over at Eponym, and which I later moved to this blog but then eventually deleted because I got tired dealing with all the fanboy comments.

Anyhow, I've begun taking some screen caps and thinking out another study on the anime series Bleach. There's one of the first screen caps above. No guns in this one, since guns don't play a part in this series. This one, rather, will be on the swords, especially the sword belonging to the character pictured above.

And that's about all. It will take me some time to go through some DVDs and take some nice screen caps to illustrate the development of his sword (it changes as time goes by).

Like I said, nothing important.
Posted by AlanDP at 9:01 PM