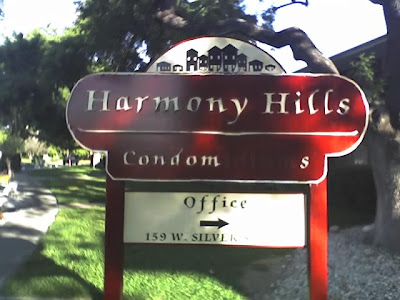 Someone was having some fun with this sign. I took this one last month on my regular cycle 8 route going down Silver Sands. Finally got around to re-installing my phone software after last month's computer crash. I think I figured out how to solve my computer problems. No more Windows updates. No so-called "security" fixes or anything. There's no way that I can catch any internet nasty that is worse than the updates themselves. So far, everything is humming along smoothly with updates turned totally OFF.

Saturday my son joined his Cub Scout troop to pot some live oak trees so they could be kept alive until they get around to planting them, which will probably be next month. They'll be planted pretty much anywhere they are wanted around La Vernia: the school, the park, around some city offices, etc. Possibly even some churches and private residences if we don't run out of trees. I calculated 37 of them while the kids were doing the work.

I've been re-ripping some special albums that I wanted to re-encode at a better bit rate for possible burning to CD so that I can listen to them in my truck while driving home from work. My editing skills have also improved since ripping them the first time and they are coming out better this time, I think.

While we were potting the trees Saturday morning, my wife did some weed mowing (we don't really have grass, except for some wild grass, and the area around our house can be called a "lawn" only in the loosest sense of the word), and she came across two copperheads. After the second one, she called it quits. I've told her multiple times that all she has to do is run over it with the lawn mower and it's immediately a dead snake, but she's one of those people who has been taught that snakes have mystical properties and can somehow inflict harm even when they're being chopped into mincemeat. Anyway, it's clear that we still live in copperhead country. That reminds me, next time I run across that old photo of the two dozen copperheads I slew when I was 14, I need to scan it immediately before I lose track of it again.

My dad's little tank is brimming full now that we've had all this rain, and I'm sure by now it has some mudcats and possibly those little sunfish that my dad calls "hardshell perch." I don't know what they're really called (possibly green sunfish or longear sunfish), but anyway, it should have some fish big enough to catch with a rod & line so I might take my son over there and let him fish a little tomorrow. I also want to look for my old 7-foot Shakespeare rod that I used to use for big fish. If it still exists on this earth, it should be stashed in his shed along with my home-made ultra-light rig. I made it for myself a long time ago and would use very small bass lures to fish for bluegill, which was a lot of fun. They'll take a top-water lure just like a bass will, and I'm sure that would thrill my son to no end.

His tank would be a good place for me to practice with my fly rod. I never got any good at it, but I have caught a few bluegills with it. Nothing respectable like bass or any of that, though.
Posted by AlanDP at 9:16 PM