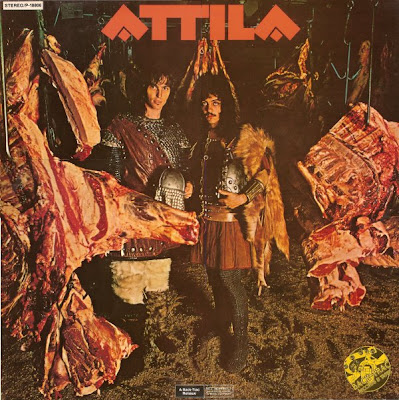 So I've posted something album-related every day this week, I think, but don't get used to it. Anyhow here at last is my Official Post on Attila. This Wikipedia stub has one paragraph that tells you pretty much all you need to know.

They released only one album, Attila, in 1970, later reissued by CBS Inc in 1985. Attila is often selected by critics and other music journalists as one of the worst rock albums of all time, but also receives a significant amount of praise from people who normally would not listen to Billy Joel. Joel himself has gone on record as describing the album as "psychedelic bullshit".

I fall into that latter camp of "people who normally would not listen to Billy Joel."* The album is interesting as an experiment into a 2-person power trio, if you know what I mean. It's quite obvious that Joel's voice is not suited to this kind of music, however in my opinion his organ playing is really good and for me bears up to repeated listening. Click the following link (previously posted) to hear a 40-odd second sound clip of his organ playing: Selection from "California Flash".

The lyrics are generally fairly stupid. As an example here is another piece (full song, lo-fi, previously posted) called "Revenge is Sweet."


I don't know what the original release label was for this record, and to me the most astounding thing is that it was ever released at all. I think someone must have had something on somebody to get this thing pressed on vinyl. The version I have is the 1985 re-release by Back-Trac Records, which is a subsidiary of CBS. I'm sure this re-release was one attempt to capitalize on the Billy Joel fever that inexplicably gripped the world in the mid-80s.

Oh, I should mention that this album has two instrumentals, so not every piece has vocals.

What genre is this stuff? I call it metal, or at least proto-metal (which would make it ore?). If you can accept that music can be metal without guitars, then it's metal. If you can't accept that, then I leave it to you to decide what it is on your own. There are parts of this album that remind me of both Emerson, Lake and Palmer and early Uriah Heep (like from the Very 'eavy, Very 'umble era).

So here's something I haven't posted yet. The liner notes. This is where it gets really good, and I've uploaded a large enough version that you should be able to read it, I think. The notes are so pretentiously over-the-top that they are just hilarious. "He...only sweats two things: perfecting his sound and South East Asia" still cracks me up. 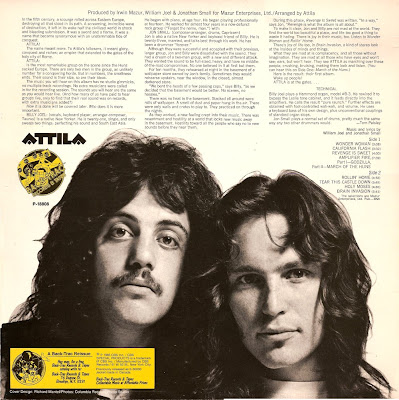 Time has passed and it is now obvious to all that Billy Joel had much bigger and more commercially viable things ahead of him. Three years after this album was released, he was the Piano Man.

*I used to have a cassette of Glass Houses. I thought the album as a whole was pretty lame, except for one song which is still a favorite of mine and is certainly my favorite Billy Joel song: "You May Be Right."
Posted by AlanDP at 8:34 PM