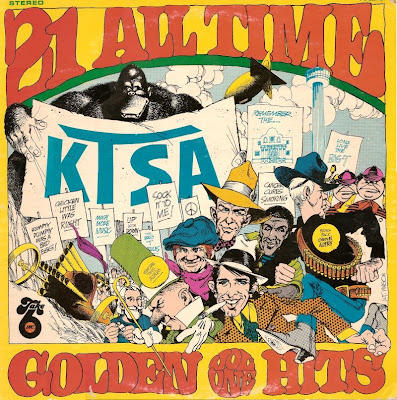 click to enlarge
21 All Time Golden Hits Vol. One - KTSA
This is not one that I would consider strange or weird really, except that it has some images specific to San Antonio and is a reminder of the olden days when KTSA was a Top 40 station. I did find some information about this and related records at this Take 6 Album Discography.

Take-6 Enterprises, Incorporated, was located at 6565 Sunset Boulevard in Hollywood, California. Take-6 issued albums exclusively for radio stations to use as promotional items, giveaways, or sales. Occasionally they were sold in stores, but only locally. Since the albums issued were all local items not meant for national distribution, Take-6 used the opportunity for a huge overlap in songs from album to album, with Take-6 licensing a relatively small number of songs and reissuing them over and over. The albums themselves were not reissued per se, but the songs were mixed and reordered so that two albums may differ only by one or two songs, although the song sequence was quite different. Album cover art was reissued, however, as several of the albums have the same basic cover art, modified to meet the needs of the particular station, even to the extent of working drawings of the deejays into the cover scenes.

Since Take-6 albums were issued in limited quantity only to certain locales, they are difficult to find today. Since they were manufactured for radio stations, they did not show up in standard references such as Schwann Catalog.

If you follow the link and scroll down to view the various variations on cover art, you can see that the KTSA version is basically identical to the KROY, KDWB and KIRL versions except that images of the Alamo and the Tower of Americas have been added. The majority of these albums all used the same elements in their cover art but the elements are arranged differently. Also, further toward the bottom of that page you can see that this record was issued for KTSA another time with entirely different cover art, which looks to me like someone was trying to imitate an R. Crumb comic.

No specific year on this, but the songs are all rock & roll hits of the 60s with a couple of tracks venturing into the more commercially accessible boundary of psychedelic rock and maybe a couple more that could be called folk-rock. A full track list is available at the link.

I haven't listened to it yet, but looking at the record I'd say this one isn't in good condition and so even though it's a relative rarity I doubt if it's worth anything.
Posted by AlanDP at 2:48 PM