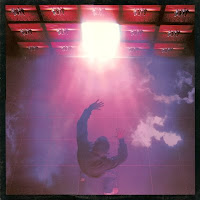 When I bought this album around '84 or '85 there really weren't any good ways to get further information on groups and albums. I think I must have read a little about them in the old Rolling Stone Record Guide which I had read from cover to cover in the early 80s.

So most of what I know about Petra I have learned only recently from reading online sources. The most significant thing about them is they pretty much created the genre of Christian rock.

Beat the System came out before "contemporary Christian" music had really established itself and ruined popular Christian music forever. This was easily their most popular album which is probably why I came across it at Hastings. They changed their sound quite a lot over the years, always trying to stay current with popular sounds (which you can interpret different ways) and this album has a very 80s electronic sound but with a much harder edge than stereotypical 80s pop. The lead singer at this time* has a voice that I would compare to Rik Emmett (of Triumph) in range and timbre.

Each song is referenced by a scripture from the Bible and the album is overtly Christian in theme. So if that turns you off, you won't like it. A couple of tracks (I'd say the first two for sure) have themes that could be interpreted in a more secular way of the individual standing against the "system." This album has one song that proved to be very controversial called "God Gave Rock and Roll To You." Heh. Another song called "Witch Hunt" criticizes so-called "Christians" who spend all their time "witch hunting" instead of applying themselves to their "Gospel labors" as they should.

I probably played this record only once when I bought it, at which time I recorded it to cassette and listened only to the cassette after that. This time my old habit paid off and I easily got a pretty much perfect rip. I have only one other album of theirs, but I bought it used and I don't think it will be in as good shape. So really, this is the only album of theirs I've heard so far, and I can't comment on any of the others.

*They had several through the years, including the guy who used to sing for the popular rock group Head East after he converted to Christianity.
Posted by AlanDP at 3:59 PM