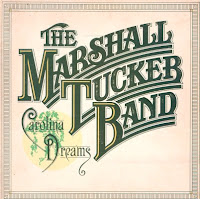 I don't remember buying this one, but I could have. My late mother-in-law had a bad habit of putting her name on her records. Sometimes she used a felt-tip pen on the jacket or the center label on the record itself. Sometimes she stuck a return address label to the jacket. This is a bad habit she passed on to her daughter (my wife). Fortunately since we don't buy records anymore it's no longer a problem, but sometimes my wife will still write her name with a Sharpie on the jewel box of a CD--which doesn't bother me as much since it's not on any of the paper itself. Anyway this record doesn't have any such thing on it, so I might have bought it, and it's the kind of thing I could have easily bought, then stuck on the shelf and forgotten about. Since I started working on this one some weeks ago, I discovered I have one other album (so far) by them that I might have bought also. Who knows.

So anyway, The Marshall Tucker Band is one of those bands I heard mentioned a lot but I couldn't name any of their songs. I figured I had probably heard something by them and just not been aware it was them. I was correct in my suspicion. This album has the radio single "Heard it in a Love Song" which I remember hearing several times in the olden days.

They were a southern rock or country rock band. Far too rock to be played on country stations, but much more country than what passes for "country" nowadays. As the Wikipedia entry mentions, they have a much more country feel than some other famous southern rock bands, except that they had a flute player (who also plays keyboards--which reminds me that Firefall also had a keyboard/flute guy). Sometimes this album even has a definite western swing feel. There is a modern version of the group who are still active.

The rip isn't perfect but pretty close, and a lot better than I expected for a used record. It has a relatively high Amazon rank of 32836 so I guess people are still buying it. Although I wouldn't call it a "great" album, I like it and I think I'll add it to my list of LPs to burn to CD. I think it would make good road music on the long drive home.