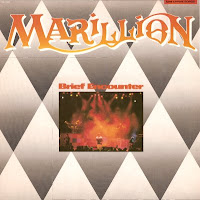 Sometime in 1986 I began to despair that Marillion were not going to release another new album that year, and I was right, but then this one turned up at Hastings and I snatched it up just like lots of other Marillion fans did because it was the only thing released by them that year. It had two new studio songs on it that I'd never heard, plus three live songs that I had heard (the studio versions of).

The two studio songs are "Lady Nina" and "Freaks," which were both released as non-album singles in the U.K. but had not before been released at all in the U.S. According to what I've read, this album was not originally released in the U.K. but still came to be somewhat in demand there because they released nothing else that year, and the live tracks had never been released anywhere before. "Lady Nina" is one of only two songs by them that I ever heard on the radio, the other being "Kayleigh" from Misplaced Childhood.*

This EP has a total playing time of right at 30 minutes. The three live songs are the title tracks from Script for a Jester's Tear and Fugazi, and a live version of "Kayleigh" since Misplaced Childhood doesn't have a title track. The album as a stand-alone is now out of print and vinyl versions such as this have become slightly collectible (there's one selling on Amazon now for around $16). It's available on CD bundled with their previously mentioned live album Real to Reel.


*My sister quite liked the Misplaced Childhood album as well. She named her daughter Kaleigh, leaving out the "y." Which meant that it was out of consideration for any future daughter I might have. But we came up with a pretty good name anyway.
Posted by AlanDP at 5:28 PM