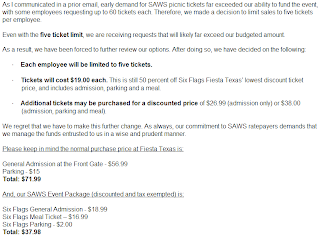 In a follow-up to this, another update on what I have come to call "the Fiasco Texas incident."

This kind of lack of foresight isn't even unusual.  For example, a while back it was determined that we needed different shirts because our blue t-shirts aren't "safe" enough, so we were going to switch to neon green (or yellow--I never can tell) t-shirts.

However, if you wanted to wear your regular blue button shirts (which is what I always wear because I don't like to work in those t-shirts), that would still be okay.  For some reason, vividly dark blue t-shirts that you can see someone wearing from 200 yards away aren't "safe" enough, but dull blue button shirts that blend in with everthing are?  It makes no sense, but that's what we have been calling "management theater" because it makes it looks like management is doing something when they really aren't.

Anyway, the representatives from the clothing company came over and fitted everyone for their new t-shirts, and I thought I would soon be selling vintage never-to-be-produced-again, limited-supply and hardly-worn t-shirts on eBay because I have about 20 of them when suddenly the news came down:  the contract calls for blue shirts--we can't get any other shirts until the contract expires.  You'd think that someone would have noticed that before the orders were placed for 150 new shirts, but...nope!


So the order was cancelled.  I'm sure that by the time the contract expires, they will have moved on to some other bit of management theater and the shirt thing will have been forgotten.
Posted by AlanDP at 3:31 PM