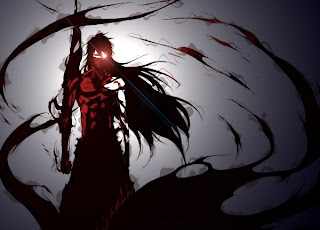 Well, I've been watching Bleach in the future (of what's being aired on Adult Swim) on the free version of Crunchyroll with my Roku.  I have only three episodes left until the end of the series.  366 episodes in total.

No one who reads this blog watches this show, I guess.  Too bad.  It has been one of the most enjoyable series I have ever watched, and it has kept me interested even through the occasional somewhat more boring parts (for example the Bount arc).  There has been a lot of "filler" and plenty of digressions (for example the one-off episode when the Soul Reapers spent the day at the beach--including heavy emphasis on several female Soul Reapers choosing, and subsequently wearing, their beach attire), but the overall story is about a renegade Soul Reaper captain named Aizen who wanted to destroy the Soul Society.  This main story ends before the full series end--the final story arc is sort of a coda.  The picture above is the form Ichigo is forced to take to fight Aizen.  It's called "the final getsuga tenshou."

I don't want to give away any spoilers, but between the end of this story arc and the beginning of the final arc there is a gap of 17 months during which Ichigo lives as a normal human with no Soul Reaper powers.  And then stuff starts happening again.

It's building up to a great ending, although my greatest fear is that there will be questions left unanswered, for example, why did Ichigo's dad quit being a Soul Reaper and go to the world of the living to live as a more or less normal human?  Well, there's three episodes left and maybe that question will be answered.  And I suppose Ichigo and Orihime will never get it together.  Another question I have is why did Uryu's father not take any action when Uryu continued to help the Soul Reapers?

So they're still a few seasons away from the end on Adult Swim, and they're involved in one of the digressionary story arcs right now, so you can start watching it and still see all the great climaxes to come.  In fact, I haven't seen what they're airing right now, because I would have to get the Crunchyroll pay service to watch that far back.  Netflix has the first 109 episodes, in English, so if you have Netflix you could watch it there.
Posted by AlanDP at 9:00 PM