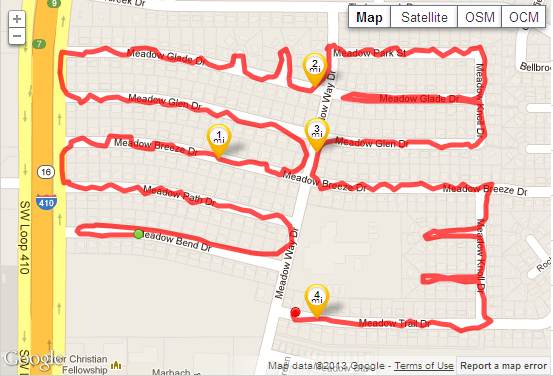 My sister has been using an app called Runtastic so I though I'd give it a try.  It works a lot better than MapMyWalk--mainly because so far it isn't as crash-prone and it actually shares to FB.  The only problem with it today it that I actually started it at the red dot but it didn't start tracking me until there where that green dot is--both dots should be right on top of each other.

So this was a little over 4 miles.  My partial was 2.3 miles.  I tried MapMyWalk on it again today just for kicks, but as before, it won't post to FB so I can't get a map off of it.

Another cool thing about this app is the map.  The map that it posts is just a basic map, but the one you get to see on your phone has a color-coded route instead of just solid red.  It ranges from red for the fastest parts down through orange and yellow to green for the slowest.  So I can look back and see which parts of the route had the most troublesome meters.

This one has a voice thing too, which is kind of annoying.  A British woman's voice announces every time you hit a new mile mark and says some other things.  I didn't have it turned up loud enough to hear it that clearly today, but the first time she announced the mile I jumped and spun around with a "WTF?!"  I hope no one saw me.
Posted by AlanDP at 2:27 PM