I like guns with a lot of history. It doesn't need to be famous history, just a gun that you can tell has seen lots of good use throughout the years. About 20 years ago, an elderly lady who my family knew decided to sell her last gun. My dad bought it for a very small price. I have used it a couple of times since then, but never carried it for plinking or hunting because it's significantly heavier than the short-barreled Rossi pump I used to have. Heavier even than the longer-barreled Winchester Model 61 pump action which I have now (it used to be my grandfather's). I did some target shooting with it a couple of times way back then. My dad never used it at all, and it became consigned to a back corner of a closet where it sat forgotten until a few days ago, when I suddenly remembered it and asked my dad, "Hey, you still got that old single-shot .22?"

Savage Arms has a new version of the Stevens Favorite.

I am calling the gun I have a Stevens Favorite because I can't find any other model that fits it. Mine, however, is not the same as a standard Favorite. The Savage version is, as far as I can tell, the same as the original, with only a 21" barrel and overall length of 36 3/4", it weighs 4 1/2 lbs.

Stevens manufactured the Favorite from 1890 to 1939. Besides the .22, it was also chambered for now-obsolete .25 and .32 rimfire ammo. According to what I have read, the original Favorite sold for $6, but the standard barrel could be lengthened for the cost of $1 additional per inch. If true, then the one I have must have cost $13.

Here are a couple of pictures. Excuse the poor quality, I have a lousy, cheap digital camera. 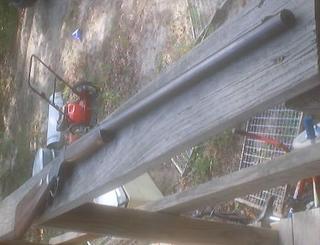 That last one looks quite impressive, and may give you a better impression of the barrel. The version I have has an overall length of 42 1/2", with the barrel at a whopping 28". It is very fore-heavy, which is why I never used it much. The first 9 3/4" of the barrel at the breech end is octagonal, the rest is round. This gun has what I would call a bull barrel. The overall diameter of the barrel is a good 3/4", quite hefty compared to the 1/2" diameter of my Model 61. It has a blade front sight and a ramp adjustable rear sight. I was going to weigh it with my fish scale, but can't find it, so with a bathroom scale and my best guess, I'm calling it at least 6 pounds.

It has a falling block lever action as can be seen here, opened and closed: 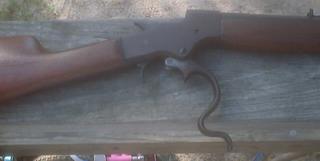 This gun was specified for .22 Long Rifle only, although I can tell you from experience that any of the three standard .22 lengths can be used in it (not the magnum, though, that's a whole 'nother beast). Longs and Long Rifles work easily, but special care must be used with Shorts. This is because when the breech is opened, the extractor stands out a short distance from the breech. The cartridge is inserted into the breech and the rim end falls into the "U" of the extractor. Shorts are too short to do this easily, and can cause loading problems, but are possible and safe to use if you pay attention and watch what you're doing when you load.

The Favorite has no safety, but it does have a hammer position in which the hammer is pushed backwards and locked into place by the block when opened for loading. In this position, the hammer can't be forced into the firing pin, it is in "safe" condition. The hammer must be cocked manually before shooting. I have read that some of these had extraction problems, but I'm guessing that was just from worn-out extractors on old guns. The one I have still extracts very positively with no problems at all. The shell throws backwards a couple of inches and falls straight down off the side of the gun.

I took it out this morning and shot it so I would have a target to show off. This gun would benefit greatly from a decent rest, as I said the barrel makes it quite heavy to the forward end. This target was shot at about 22 yards or so, while I was sitting on the ground using my knees and elbows for a rest. The first shot went high (you can't see it), striking just above the target but dead center. After that I took a different sight picture and got these five shots: 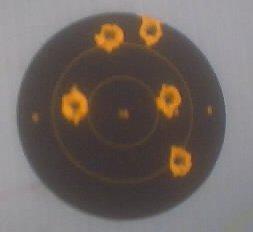 This target is slightly less than 3" in diameter, and the 10-ring is just a hair less than an inch across. Not the best shooting, but then I haven't fired a rifle in over a year (yeah, yeah, I know, but I've been preoccupied with handgun shooting), and I was being eaten alive by several dozen mosquitoes at the time (as if that's any excuse). I think with a little more practice I could at least keep all my shots inside the 9-ring, and then I'll be ready for some serious squirrel sniping. I'm also going to tweak the back sight a little so I'm more comfortable with the sight picture.

I have a sneaking suspicion that somone is going to read this and tell me that it isn't actually a Favorite, but some other similar Stevens model of which I am unaware. I will gladly welcome any corrections.

The wood on this gun has its fair share of nicks and scratches, and the metal finish isn't the best anymore, either. The original buttplate is gone, and someone long ago replaced it with a strap of leather. This is a gun that has probably spent several decades feeding a hungry family on rabbits and squirrels, and I'm looking forward to taking it out again sometime soon. It's been a long time since I've had squirrel stew.