Was just trying to leave a comment over at Baboon Pirates and got this captcha. 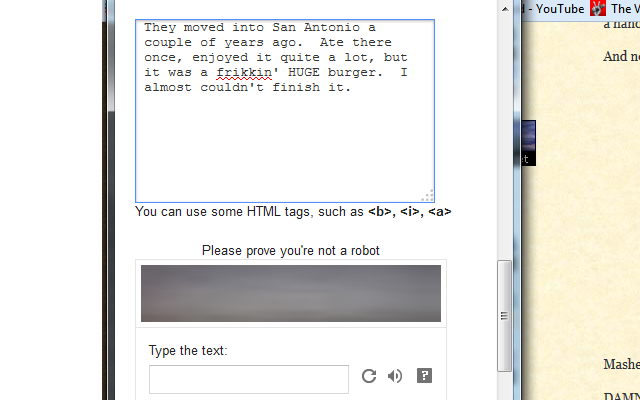 Posted by AlanDP at 8:31 PM No comments: Links to this post

I thought I should write something here just to show a little activity of some sort.

We are now in the part of the year that I fondly refer to as "hell-time."  June, July and August are the worst months of the year.  It is just so hot being outside all the time.  Our department was told to hire 10 more people.  New people in our department always start out as temps.  Due to corporate red tape, it's much easier to fire someone who's a temp if he/she isn't working out.  In the past, temps were required to drive their own vehicles while working, and were paid a gas allowance.  But someone in H.R. decided that NO ONE WOULD DRIVE THEIR OWN VEHICLE ANYMORE FOREVER PERIOD.  But the budget department says we can't have 10 more trucks.  So one of our managers has to ferry the temps out to routes and drop them off, then go back out and pick them up when they finish.  Fortunately, we have only 3 temps right now so it's possible, but in another month or so when there will (theoretically) be several more, it will be impossible.  I suggested they have them mop the floors every day.  This is how your water company works, folks.

My son was just watching Forrest Gump (1st time).  He just walked in here and said, "There was 14 minutes left, but it got too sad."  Heh.

Our family reunion is coming up soon, so I've been hitting the ukuleles pretty hard, since my "gig" last year went over so well.  Sometimes I have to stop because my fingers get too sore.  I have some calluses built up, but still they hurt sometimes after a couple of hours of strumming.  I wrote one new song recently, which was really cool.  I haven't written any songs in many years.  I mostly use the tenor uke now, but there are still a few songs that I switch back to the soprano for.

When I was growing up, every summer for several years I went to a church music camp where I was taught pretty much everything there is to know about a capella singing as well as learning song writing (classical music theory).  I'm planning on going again this year, after a hiatus of decades, to see what the current incarnation of the school is like and to get a refresher course.  I'm taking my daughter with me this time, and she's looking forward to it because it's a music school.

In a related subject, one of the purposes of this school was not only to learn about music, but to learn about it so we could go back and teach at our home congregations.  Well, I'd never done such a thing, but about a month ago I started teaching a music class at my congregation.  There hasn't been a lot of participation, but there are several hard-cores who attend every week and I've been enjoying it (surprisingly).  My goal is to get several people trained up enough that they can read music well enough to learn new songs without too much trouble.

I used up all of my bulk pipe tobaccos a while back, so I've been dipping into my small stash of tinned tobaccos that have been aging for several years.  The good thing about tinned tobacco is that it's vacuum-sealed, and as long as that seal isn't broken, they can last a long, long time.  Sometimes they will even "sugar," that is, the oils will partially crystallize and appear like small glistening sugar crystals on the leaves.  I had one tin of a kind called Balkan Flake that did this a little.  Man, it was good.  I've already finished it.  It was like eating a rich, well-done steak.  It's a latakia blend, and I don't usually like stuff with latakia that much anymore (I used to like it a lot more), but this one I just loved.  I'm currently working my way through one of my two tins of Escudo, which is a Perique blend that I've had before and I knew I would like it--so much so that I kept putting off using it.  I had to use some of my overtime to buy a new computer for the kids, but I think I will be able to place another order soon.  More bulk, plus at least one new tin each of Balkan Flake, 1792 Flake and Escudo.  Maybe a tin of Nightcap, which I also really like.  1792 Flake is a Virginia flake that is flavored with tonquin, which is a flavor that must be experienced because it can't be described.  Some people hate it.  Some people love it.

Escudo is a Virgina/Perique rope tobacco.  The leaves are spun into a rope so that they are all pressed together, then cut into discs or "coins."  Each coin is about halfway between the size of a quarter and a 50-cent piece.  When it's not burned, it smells sort of like fresh hay and molasses.  A "flake" tobacco is when the leaves are pressed into sheets and then cooked for several hours under pressure before being cut into more conviently-sized strips that can fit into a tin.  Rope tobaccos like Escudo are usually put into round tins, while flakes are usually put in rectangular tins.

Oh yeah, I also recently learned that Three Nuns is once again available in the U.S.  It's a Dutch rope tobacco that's somewhat similar to Escudo, but the coins are smaller, about the size of dimes or nickels.  Might have to get one of those tins, too.

If any of my legions of readers are anime fans, I recommend one that I just started watching called Attack on Titan.  It's really intense, and one of the "realistic" anime, by which I mean doesn't use "cartoonish" animation, but it's sci-fi themed, so it isn't "realistic" in that sense.  They started showing the English dub on adult swim, but it was so good I started watching the original Japanese (with English subtitles) on Netflix.  Sometimes the voice differences are almost shocking.  One character in the English dub version sounds like the pimply-faced teenager from the Simpsons.  It would be funny if that character weren't transfixed in abject terror most of the time.  It's a war story, so there are a lot of violent deaths.  It's could be the most horrific show I've ever seen.
Posted by AlanDP at 8:16 PM No comments: Links to this post