Come and Take It

This post at TFS Magnum reminded me of the Texan version, which I found a detailed history of at the pro-gun commercial website Battle Flags, Etc. (they sell flags).

The fog lifted suddenly as a curtain, showing both forces drawn up on an open prairie. With the Come and Take It flag flying, the Gonzales cannon fired, and Captain Castaneda immediately requested a parley, asking why he was being attacked.

Colonel Moore, commander of the Texans, explained that the Captain had demanded a cannon given to the Texans for 'the defense of themselves and the constitution and the laws of the country,' while he, Castaneda, 'was acting under orders of the tyrant Santa Anna, who had broken and trampled underfoot all the state and federal constitutions of Mexico, except that of Texas,' which last the Texans were prepared to defend.

Castaneda answered that 'he was himself a republican, as were two-thirds of the Mexican nation, but he was a professional officer of the government,' and while that government had indeed undergone certain surprising changes, it was the government, and the people of Texas were bound to submit to it.

Moore then suggested to the Captain, if he were a republican, he should join the revolution against tyranny by surrendering his command, and join them in the fight. Captain Castaneda replied stiffly that he would obey his orders. At this, Moore returned to his own lines and ordered the Texans to open fire. There was a brief skirmish, and the Mexican force immediately abandoned the field and rode back toward San Antonio. 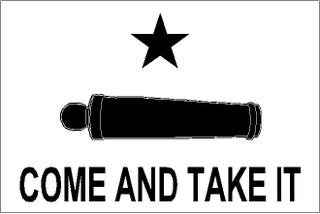 Also available is another flag with a modern update. 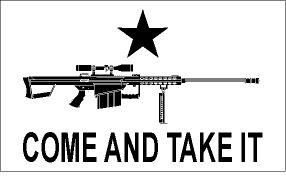