Cracked has another article on bizarre Halloween (so they say) costumes, this time from Germany. 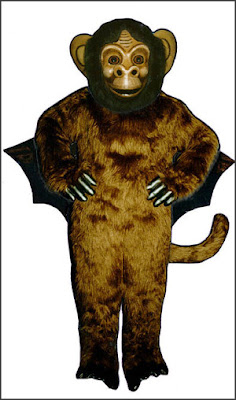 This is not the funniest one. Actually I think the "socialized medicine" guy is pretty funny. No, I chose this one because it's totally creepy. I mean, if flying monkeys suddenly became real, and I saw a real flying monkey, I would just start shooting. In fact, I might just drop everything and dedicate my life to the complete elimination of flying monkeys. I think I might have had a run-in with some of these during a previous life on an alien planet or something. I don't know. There's just something fundamentally wrong with the concept of a flying monkey.

If I saw a person wearing this costume, I'd probably settle for just knocking him down the stairs or something.
Posted by AlanDP at 6:13 PM