Nobody puts ketchup on hot dogs 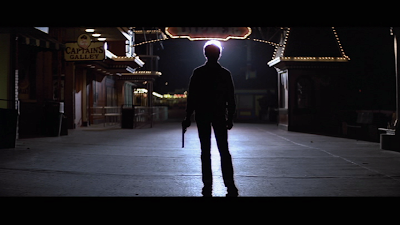 Borrowed this DVD from my dad a couple of weeks ago, and this morning while my wife and the kids went and did some running around, I got a chance to watch it without anyone around to bug me.

And I finally had an excuse to use a program that came bundled on this machine: InterVideo WinDVD. It has a very handy screen capture function.

I noticed one serious continuity error. The dog Meathead is obviously a male during all but one scene, in which "he" is obviously a female. I mean, it's like someone made the switch as a joke or something. I know they often use multiple animals that look mostly the same, but this one was so different it was just weird.

Also every time something gets shot, the surface sprays back toward the shooter like a little explosive charge went off where the bullet allegedly hit. And the remark about the "300 grain cartridge" was painfully incorrect. But it's still one of my favorite movies.
Posted by AlanDP at 4:19 PM