It takes a state as big as Texas to hold a heartache big as mine... 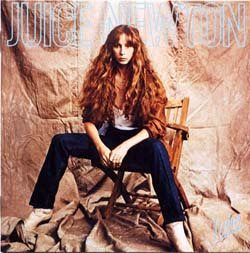 It was 1981, and if you were a teenage boy in a small country town in south Texas and you didn't think Juice Newton was hot, well, let's be brutally honest. You were probably gay.

I did a volunteer overtime day this morning (3 1/2 hours of actual work, but of course I got paid time-and-a-half for 8 hours--as I told my dad once, I'm glad I don't have to buy my water from them) then came home and unloaded the last cache of stuff from the camper trailer. I was hoping to upload some photos today but unfortunately I still can't find my USB cables. I did find my iMic, which is troubling, because I thought I had stored it with all the other important cables.

So I lost no time in hooking up the iMic and digitizing a tape that I had recently rediscovered while unpacking. This tape was purchased at a music store somewhere in Dallas during our senior trip (which I actually remember in minute detail and get flashbacks every time I hear Journey's "Don't Stop Believing"). I purchased one other tape at the same time, the Eagles first "Greatest Hits," which was worn out long ago. I don't know how this tape has survived this long. Numerous other cassettes of this and later vintage have all worn out, become unlistenable, and were thrown away. This one still sounds great. It's even more puzzling because I listened to this tape far too many times to count and it should have worn out a long time ago.

I received the first part of my tobacco order this week, so I had further incentive to unload the camper because that's where all my pipe stuff was. It's all unloaded now, back in the racks on the shelves of my Sanctum. And I'm just coming to the end of my first pipe. Been too long since I've had the Gray Ghost.

So, all things considered, it's a pretty good Saturday afternoon.

Note to self: Ask mom if I can borrow the Dottsy album. I need to digitize it, too.
Posted by AlanDP at 3:00 PM