I was just making the nightly rounds and was standing by the back door looking out at the sand, trying to see another copperhead--because when it's still this abysmally hot this late at night, the snakes are out--when something four-legged walked out under the security light. When it first came into my peripheral vision, I thought it was a big cat, but when it turned sideways and walked across the yard I could see it was one of these: 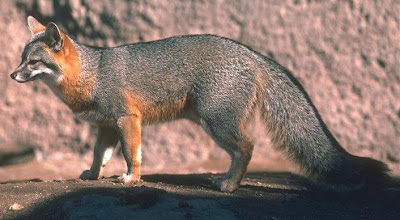 Far out. I have never seen a gray fox before. I know they are generally considered to live statewide, but they didn't use to live around here. Another animal that has moved in from who knows where. Long ago, some 40 years ago that is, I saw red fox on two separate occasions, but I think they have since died out.

I watched it quietly poke around the house for a few minutes before it spooked and vanished into the darkness. I was so excited I almost called my dad, but he's probably asleep by now. I'll call him about it tomorrow.
Posted by AlanDP at 9:23 PM