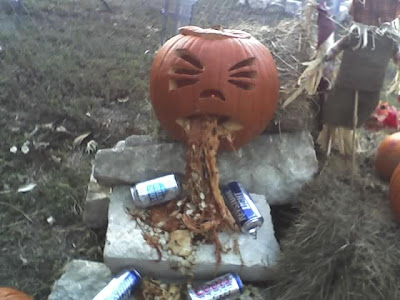 As I mentioned earlier this week, I had a personal holiday to use up, so I took it today. My wife happened to be off today as well, so we just hung around the house while the kids went to school. It was nice watching a couple of movies without having the kids around. Also I made a pot of chili. It isn't really chili weather, but I had a hankering for it anyway. I'll probably make another pot when (if!) we get our first real cold snap.

Then we went to a Halloween festival at the local Baptist church and the kids went trick-or-treating in the surrounding neighborhood. Three church groups in our small town have Halloween (or Fall) festivals (Baptist, Church of Christ, and Methodist). The Methodists always win as far as sheer elaborateness goes. But they had theirs last night so we didn't go because it was a school night. They moved it to Thursday this year because they knew tonight's football game would wreak havoc on their parking. We at the C of C had ours last Friday, to avoid conflicting with the other two. So far, we are the only ones who run a haunted house, or a spook house, as we always called it when I was a kid. And it's not one of those disgusting "hell houses" that are put on by some (cough) "fundamentalists." It was a real spook house, with scary witches, skeletons, a werewolf, and a friendly angel that got attacked by someone dressed up like Jason (of Friday the 13th). I always enjoy it immensely, because the people who set it up put some real creativity and a lot of work into it. I always find something quite striking and beautiful in it, which sounds strange but I often find beauty in macabre imagery.

Anyway, the photos above and below were captured by cell phone at one of the houses that our kids trick-or-treated. 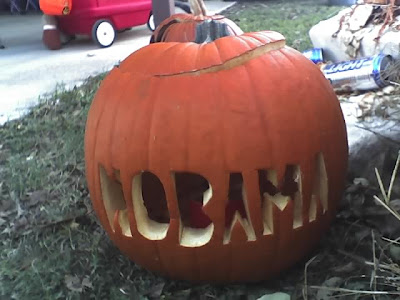